“The sharp degeneration of the situation in Mali, which has led to the flight and continued forced displacement of a huge number of Malians in such a short time, is totally unexpected,” UNHCR’s deputy director for West Africa, Central Africa and the Great Lakes region, Liz Ahua, said in a news release.

The new appeal will cover operations this year in Burkina Faso, Mali, Mauritania and Niger, according to a news release issued by the Office of the UN High Commissioner for Refugees (UNHCR). It replaces the $35.6 million appeal issued in February to cover the period up to July 2012.

Nearly 320,000 Malians have been forced to flee to neighbouring countries or seek refuge in safer parts of Mali as a result of fighting that resumed in January in the country’s north between Government forces and Tuareg rebels, the proliferation of armed groups in that region, and a deepening crisis due to a coup d'état in March.

The increased funding will enable the agency to assist 240,000 refugees and 200,000 internally displaced Malians until the end of the year.

According to UNHCR, the majority of the refugees are settled in remote locations where the local communities are already facing food insecurity and severe water shortages due to years of drought in the Sahel region.

Acute malnutrition rates among children under five years old are “alarming,” particularly in refugee sites in Mauritania and Niger, and there is an urgent need to increase water supply and improve sanitary conditions, the agency stated.

“UNHCR is grateful to donors for the support received so far. However, our current funding level is woefully inadequate,” the agency stated. “We desperately need more funds now, ahead of the rainy season, which starts in June and is often marked by flooding.”

Humanitarian organizations estimate that there are currently 15 million people facing food insecurity in Africa’s Sahel region, which stretches from the Atlantic Ocean to the Red Sea, and also includes Chad, Mali, Mauritania, Niger, and the northern regions of Cameroon and Nigeria. 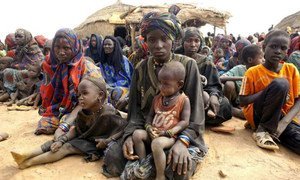 The United Nations food and refugee agencies today launched a joint emergency operation to respond to the food needs of hundreds of thousands of people who have fled conflict in Mali and crossed the border into neighbouring countries.