22 May 2012
The United Nations food and refugee agencies today launched a joint emergency operation to respond to the food needs of hundreds of thousands of people who have fled conflict in Mali and crossed the border into neighbouring countries.

The new operation, which will be carried out by the World Food Programme (WFP) and the Office of the UN High Commissioner for Refugees (UNHCR), aims to assist 300,000 internally displaced people (IDPs) and 255,000 refugees this year.

“We are working side by side with UNHCR to help families who have been forced from their homes in Mali and now need urgent food and shelter,” said WFP’s Executive Director, Ertharin Cousin, in a news release. “The refugees from Mali have fled conflict in their own country, and now find themselves across the border in neighbouring states that are already suffering from the severe effects of a regional drought.”

Mali is among several countries in the West African part of the Sahel region, which stretches from the Atlantic Ocean to the Red Sea, that are suffering from a food crisis resulting from prolonged drought. The northern part of the country has also witnessed resumed clashes between Government forces and Tuareg rebels since January, leading to the mass displacement of civilians who have sought refuge in neighbouring countries.

WFP and UNHCR said the $77 million operation will give WFP the flexibility to respond to the evolving refugee situation, and appealed to the international community to help fund the response.

“The Sahel represents a deadly combination of drought and displacement by conflict. This is not only a dramatic humanitarian problem but it has become a threat to global peace and security,” said the UN High Commissioner for Refugees, Antonio Guterres. “Donor support is crucial if any humanitarian effort is to make headway.”

So far, WFP has reached IDPs and refugees with food assistance in Mali, Mauritania, Burkina Faso and Niger, as part of its overall Sahel emergency operation which aims to support around 9.6 million people affected by the hunger crisis caused by a combination of insecurity, drought, crop deficit and high food prices. To do this, the agency must secure funding to help bridge a shortfall of around $360 million.

For its part, UNHCR has been establishing refugee sites and working in Niger, Burkina Faso, and Mauritania to help tens of thousands of refugees who continue to cross over from Mali. Inside Mali, UNHCR is working with its partners to reach IDPs.

“Time is not on our side,” said Ms. Cousin. “If no new food or cash contributions are received immediately, the resulting inability to pre-position and distribute enough food at the peak of the lean season, from June to September, would be catastrophic for the most vulnerable, food insecure people – especially women and children.” 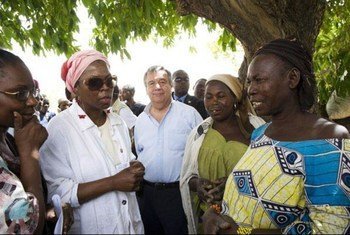 7 May 2012
Wrapping up a four-day visit to the epicentre of the food crisis sweeping the Sahel region of West Africa, two top United Nations humanitarian officials today urged the world to meet its commitments, both financial as well as political, to help those in need.