FAO
A sample of some underutilized indigenous foods.

31 May 2012
Indigenous foods which have been neglected by the food industry and urban consumers can be an important tool to alleviate hunger and malnutrition, a United Nations official said today.

“The focus of research and crop improvement on a few widely consumed crops has helped meet the food needs of the rapidly growing world population, but it has narrowed dramatically the number of species upon which global food security and agricultural incomes depend,” the Food and Agriculture Organization’s (FAO) Regional Representative for Asia and the Pacific, Hiroyuki Konuma, said at a UN-backed symposium in north-eastern Thailand.

The two-day meeting – which brings together scientists and experts from 38 countries and includes 12 food exhibition stalls – is focussed on the role of local and indigenous foods, with FAO and partners encouraging a revaluation of forgotten and neglected foods which are often largely underutilized.

According to FAO, globalization has reduced the number of plant species used for food and other purposes from roughly 100,000 to about 30. With the global population expected to reach nine billion by 2050, FAO is concerned that the world may not be able to produce enough food to meet demand.

Indigenous and traditional foods - which are sometimes undervalued and classified as ‘foods of the poor’ or ‘forgotten foods’ - can play an important role in helping the estimated 925 million people who suffer from hunger and malnutrition worldwide, 60 per cent of whom live in the Asia-Pacific region, FAO noted in a news release.

It added that among neglected traditional foods in Asia that could help meet the needs of local populations are forest fruits, sago palm, medicinal wild plants and edible insects.

Symposium participants have called for more research and development into neglected food sources, and for the promotion of a greater diversity of sources of nourishment.

The symposium, which ends on Saturday, is jointly organized by the University of Khon Kaen, the Thailand National Council for Science, the Japanese International Research Center for Agricultural Sciences, the Crop for the Future Initiative, and FAO. 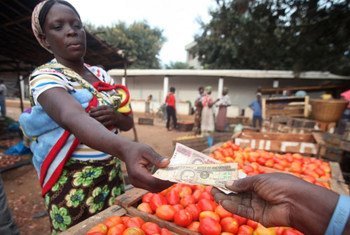 30 May 2012
Sustainable development will not be achieved unless hunger and malnutrition are eradicated, the United Nations food agency warned today in a new report.