FAO/Paballo Thekiso
A woman purchases vegetables at a local market.

30 May 2012
Sustainable development will not be achieved unless hunger and malnutrition are eradicated, the United Nations food agency warned today in a new report.

“We cannot call development sustainable while this situation persists, while nearly one out of every seven men, women and children are left behind, victims of undernourishment,” said the Director-General of the Food and Agriculture Organization (FAO), José Graziano da Silva, in a news release.

In the report – entitled Towards the future we want: end hunger and make the transition to sustainable agricultural and food systems – prepared for the UN Sustainable Development Conference (Rio+20), which will be held in Brazil next month, FAO stresses the need to address the flaws in the current food system so that hundreds of millions of people in developing countries have the means to produce or purchase the food they need for their own consumption and income.

“The quest for food security can be the common thread that links the different challenges we face and helps build a sustainable future,” Mr.Graziano da Silva said. “At the Rio Summit we have the golden opportunity to explore the convergence between the agendas of food security and sustainability to ensure that happens.”

The report urges governments to establish and protect rights to resources, incorporate incentives for sustainable consumption and production into food systems, promote fair and well-functioning agricultural and food markets, and invest public resources in public goods, especially innovation and infrastructure, among other measures.

The report also provides recommendations to help farmers who operate 500 million small farms in developing countries and whose resources are limited due to insufficient access to food and nutrition.

In addition, it notes the need to change consumption patterns in the developed world to reduce food waste. FAO estimates that global food losses and waste amount to 1.3 billion tonnes per year, which represents roughly one-third of the world food production for human consumption.

To be able to feed the expected global population of nine billion people in 2050, an improved governance of the food an agricultural system is required, the report stresses.

“Unless purposeful action is taken, the increase in food production of 60 per cent needed to meet effective demand will still leave behind over 300 million people who are expected to suffer from chronic hunger in 2050 because they will remain without the means to access food,” FAO noted. 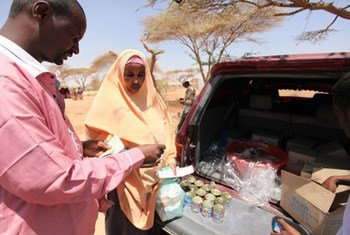 15 May 2012
Thousands of people in Somaliland, in northern Somalia, are getting more fresh meat in their diet as a result of an innovative UN initiative that provides parents with vouchers to help them afford nutritious food from local traders, according to the World Food Programme (WFP).