On the latest leg of their mission to West Africa, the fifteen members of the Security Council today heard from Ivorian refugees who relayed their stories of survival and expressed their concerns.

“We are grateful for your welcome, we are listening closely, and we are looking forward to discussing with you,” Ambassador Susan Rice of the United States, one of the Council delegation’s co-leaders, told the refugees at the Primier Timber Production Company camp in the town of Zwedru in Liberia. “We are interested in your stories; how did you get here and why… and what are your concerns about returning home.”

The camp, which has a population of more than 7,200 people, is now the largest of the six refugee shelters set up by the Office of the UN High Commissioner for Refugees (UNHCR) and the Liberian Refugee, Repatriation and Resettlement Commission to receive Ivorian refugees. The Council members flew in from Guiglo, in neighbouring Côte d’Ivoire.

Some 200,000 refugees fled Côte d’Ivoire in search of security in Liberia in the aftermath of the disputed 2010 presidential run-off election there. The situation claimed the attention of a wide range of humanitarian actors and Liberian institutions, which then mobilized to bring assistance to Ivorian refugees, Liberian returnees and third country nationals.

More than half of those who came into Liberia have since returned, either on their own or with UNHCR’s assistance. Liberia currently hosts more than 67,300 Ivorian refugees, located mainly in the border counties of Grand Gedeh, Maryland, Nimba and River Gee.

According to a news release issued by the UN Mission in Liberia (UNMIL), Ambassador Mohammed Loulichki of Morocco, the delegation’s other co-leader, told the refugees that the Council had come to see them with a message of hope: “Hope that the refugees would soon see their loved ones in peace, security and dignity.”

While at the camp, the members of the Security Council broke into smaller groups to listen to individual testimonies of men and women, representing a cross section of all six refugee camps in the country.

The Council members left New York last Friday on the official mission to West Africa, which includes visits to Liberia, Côte d’Ivoire and Sierra Leone. Earlier in the week, the delegation was in Monrovia for a two-day visit before departing for Côte d’Ivoire.

While in Liberia, the delegation met with President Ellen Johnson Sirleaf, and other Government officials, as well as representatives of Liberian civil society organizations. The last visit of the Security Council to Liberia was in 2009. 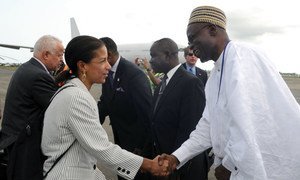 Ahead of their visit to Côte d’Ivoire, the members of the Security Council commended Liberia for its progress since the end of its civil war in 2003, and reiterated their support for efforts on reconciliation and inclusive dialogue in the West African country.