15 May 2012
An operation to fly back to their country an estimated 12,000 citizens of South Sudan stranded at a riverside town in neighbouring Sudan has begun, a senior United Nations official said today, adding that the returnees are being provided with humanitarian assistance on arrival back home.

“Humanitarian agencies have been working around the clock for the past week to be ready to receive these people, many of whom have been stranded in Kosti in Sudan, waiting to come home for up to a year,” she added.

The airlift from Kosti, a river port on the White Nile, started yesterday, with two flights bringing 326 people to the South Sudanese capital, Juba. The operation is expected to continue over the next two weeks, with as many as 1,000 people returning to South Sudan on the busiest days.

Once in Juba, returnees are being offered temporary accommodation until they are able to proceed to their final places of settlement.

The group that arrived yesterday was taken to a Juba way station, managed by the Office of the UN High Commissioner for Refugees (UNHCR). A new transit site, located within Juba County, is currently being established by humanitarian partners with the support of the relevant local and national departments.

“Many of these families have been waiting for months and months to return,” Ms. Grande said. “We saw babies who had been born in Kosti and were coming home to start a new life in a new country.”

The airlift falls on the busiest time of the year for humanitarian organizations – when supplies have to be pre-positioned in hubs throughout South Sudan before the onset of the rainy season when roads become impassable, making up to 60 per cent of rural areas inaccessible.

UN agencies and their partners are helping more than 375,000 South Sudanese who have returned from Sudan over the past 18 months, as well as 20,000 people displaced by violence along the two countries’ borders in March and April. Some 170,000 people affected by inter-communal fighting in South Sudan’s Jonglei State in January and the 110,000 displaced from the contested area of Abyei a year ago are also receiving support.

The number of refugees has also been increasing dramatically, with arrivals from Sudan’s Southern Kordofan state averaging 550 per day in May, almost six times more than the number of people who were arriving in March. An estimated 8,000 refugees recently arrived or are currently crossing the border into Maban County from Sudan’s Blue Nile State.

Ms. Grande stressed the urgent need for funds, noting that only 32 per cent of $776 million sought in this year’s humanitarian consolidated appeal for South Sudan has been received. 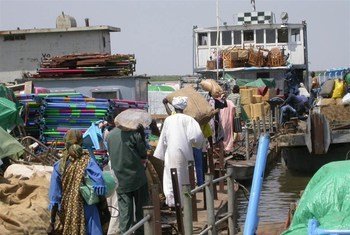 1 May 2012
The top United Nations humanitarian official in Sudan today voiced concern over the plight of thousands of citizens of neighbouring South Sudan who are stranded at the Kosti river port on the White Nile, where they have been waiting for barges to take them back to their country.