An independent United Nations human rights expert has urged the Cambodian Government to act with more transparency when dealing with economic and other land concessions, and to make the process more inclusive for the individuals and communities affected.

Over the course of his week-long fact-finding mission, Surya P. Subedi met with individuals, villages and communities affected by economic and other land concessions and heard first-hand how their lives have been affected.

“I received a number of distressing testimonies and got to see for myself how economic and other land concessions were impacting on the local populations, as well as the natural environment,” Mr. Subedi, the Special Rapporteur on the situation of human rights in Cambodia, said in a news release.

Mr. Subedi said he was told of a system with such little transparency that communities are often not aware when and how a concession is being granted near them.

“Nor do they know much about the company to whom the concession is granted, its track record, whether it is foreign or domestic, or even, in some cases, its name,” he noted. “My own assessment confirms this situation. Access to information is paramount.”

The Special Rapporteur urged the Government to act with more transparency when granting and managing economic and other land concessions, exercise more oversight over business enterprises involved with concessions, and make the process more inclusive for those affected.

He particularly highlighted the situation of indigenous peoples, whose special bonds to their land are “well-known and documented.” He acknowledged the Government for having established a specific legal framework on land tenure for indigenous peoples and welcomed the granting of the first three communal land titles to indigenous communities.

“Until these communities can secure their land titles, indigenous land should be protected and secured in accordance with the law,” he said, urging the Government to speed up the process for the granting of other communal land titles.

The expert also welcomed Prime Minister Hun Sen’s decision, earlier this week, to postpone the granting of new economic land concessions and called for a review of all existing concessions with a view to protecting the interests of communities.

Mr. Subedi’s full report will be presented to the Human Rights Council in September.

♦ Receive daily updates directly in your inbox - Subscribe here to a topic.
♦ Download the UN News app for your iOS or Android devices.
Cambodia|rights 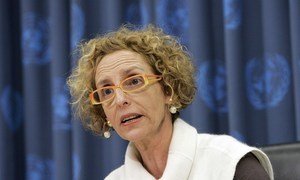 An independent United Nations human rights expert today expressed her extreme concern about the threatened eviction of nearly 100 families in Phnom Penh, and called on the Cambodian authorities to halt this practice pending a review of current policies.