The head of the United Nations agency tasked with assisting Palestinian refugees today urged the Israeli Government to find an acceptable solution to the issue of Palestinian prisoners on hunger strike, noting their demands are generally related to basic prisoners’ rights as stipulated in the Geneva Conventions.

The Commissioner-General of the UN Relief and Works Agency for Palestine Refugees in the Near East (UNRWA), Filippo Grandi, also voiced grave concern over the health of the more than 1,000 Palestinian political prisoners on hunger strike in Israeli jails.

“Filippo Grandi reiterates the call of the Secretary-General of the United Nations that those under administrative detention be brought to trial or be set free, noting that two of the administrative detainees are in serious conditions after more than 74 days, and are in imminent danger of death,” an UNRWA spokesperson said in a statement.

More than 1,000 Palestinian prisoners began an open-ended hunger strike two weeks ago, on 17 April – Palestinian Prisoners Day – to protest against unjust arrest procedures, arbitrary detention and bad prison conditions, according to the Office of the High Commissioner for Human Rights (OHCHR).

Yesterday, Secretary-General Ban Ki-moon’s spokesperson said Mr. Ban is following with concern the ongoing hunger strike, and he stressed the importance of averting any further deterioration in their condition, urging everyone concerned to reach a solution to their plight without delay.

The hunger strike also came up for discussion during today’s meeting between the UN Special Coordinator for the Middle East Peace Process (UNSCO), Robert Serry, and the President of the Palestinian Authority, Mahmoud Abbas, with both expressing the urgency of finding a solution for the issue, according to news release issued by Mr. Serry’s office.

Mr. Serry reiterated the concern of the UN over the situation, as Mr. Abbas expressed his appreciation of the UN contribution to efforts to resolve the issue. The pair also discussed other issues of common interest, including the need for meaningful peace talks between Israel and the Palestinians, as well as internal Palestinian issues. 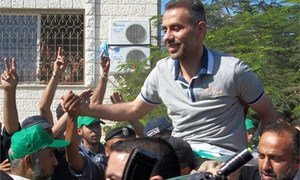 Secretary-General Ban Ki-moon today stressed the importance of averting any further deterioration in the condition of Palestinian prisoners in Israeli custody who are on hunger strike, and urged everyone concerned to reach a solution to their plight without delay.