10 May 2012
The top United Nations relief official today called for greater efforts to build the resilience and preparedness of the people of Afghanistan to natural disasters, given the country’s vulnerability to floods and droughts that affect large segments of the population every year.

“Annual flooding is the norm and there have been eight droughts in 11 years,” said the Under-Secretary-General for Humanitarian Affairs, Valerie Amos, on the third day of her to Afghanistan, following a visit to Balkh province in the country’s north, where she met families affected by natural disasters and conflict.

“More must be done to help local authorities prepare better and we must make a greater effort to build the resilience of communities,” she added.

In the village of Buzareg, along the Amu Darya river, Ms. Amos was shown the destruction that has resulted from riverbank erosion, causing damage to homes, farms and social amenities, including schools, roads, and clinics.

“Families are forced to leave their homes – some of which have stood for decades – and face a very difficult and uncertain future,” said Ms. Amos, who also serves as the UN Emergency Relief Coordination and head of the UN Office for the Coordination of Humanitarian Affairs (OCHA). “We will continue to support them with immediate assistance, but what is really needed is a long term solution to this problem.”

While in Buzareg, the humanitarian official also met separately with groups of women and children, later noting that they remain the most vulnerable segments of the Afghan population.

“Infant and maternal mortality rate are amongst the highest in the world and child and adult literacy rates are amongst the lowest. To break this cycle of underdevelopment special attention must be paid to the specific needs of women and children,” Ms. Amos said.

In Balkh province’s capital, Mazar-i-Sharif, Ms. Amos met with families displaced by conflict and listened to their stories of violence and intimidation, which resulted in their displacement.

She urged all parties to the conflict in Afghanistan to respect their obligations under international humanitarian law. “Every effort must be made to minimize harm to civilians and ensure respect for and protection of civilians,” she added. 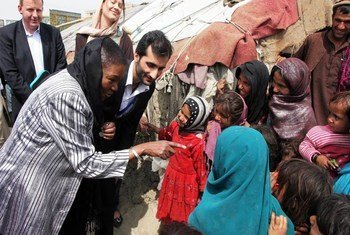 9 May 2012
The top United Nations humanitarian official today voiced concern over “unacceptable” conditions in informal settlements sheltering displaced people and former refugees in Afghanistan, and called for greater support for durable solutions to alleviate their hardship.