28 April 2012
Secretary-General Ban Ki-moon today called on India to lead the way in improving health services for women and children, stressing that addressing this issue is a crucial investment in the future of the South Asian nation.

"Around the world, some eight million women and children die from preventable causes each year. Almost two million of them are Indian," Mr. Ban said in his remarks at a reception in support of the Every Woman Every Child initiative held in the city of Mumbai. "I am deeply disturbed by these numbers. But I am also fully convinced that we can drive them down."

The Every Woman Every Child initiative is a global effort that was launched in 2010 to mobilize and intensify global action to save the lives of 16 million women and children and improve the lives of millions more.

Mr. Ban told members of the business and creative communities present at the reception that their participation was crucial to address this issue, and praised efforts already in place such as the Business Leaders Council whose aim is to help India achieve the Millennium Development Goals (MDGs), the anti-poverty and social development targets that have an achievement deadline of 2015, which include improving women and children's health.

"Too many pregnant women in India have no health services. Too many others have to walk for scores of kilometres just to reach a clinic, and even then, too many mothers and their newborns do not survive. That is why we need to care for every woman and every child." Mr. Ban said.

At the reception, Mr. Ban also announced the appointment of Prasada Rao as his new Special Envoy for HIV/AIDS in the Asia Pacific region. Mr. Rao has extensive experience in AIDS response. He was previously director of India's National AIDS Control Organization and regional director of UNAIDS for Asia and the Pacific.

During his visit to Mumbai, which finishes today, Mr. Ban met with leading Bollywood and sport stars, many of whom are UN goodwill ambassadors, and thanked them for their work helping to raise awareness on HIV, human rights and poverty in the country. "Many of their films tell stories of the poor. They reach millions of people I never could, and they inspire action against poverty and injustice," he said.

Earlier today, Mr. Ban also met with Prithviraj Chavan, Chief Minister of Maharashtra, with whom he exchanged views on Maharastra's progress on the MDGs and, in particular, on health-related issues and programmes. They also discussed increased partnerships with the private sector for sustainable development. 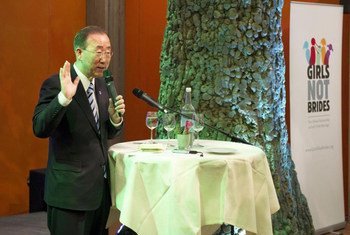 26 January 2012
Secretary-General Ban Ki-moon called today on business leaders attending the World Economic Forum in Davos, Switzerland, to increase their investment in women’s education and health to ensure their well-being and encourage their participation in the world economy.