UN Photo/Eskinder Debebe
Secretary-General Ban Ki-moon speaks at event for the Every Woman, Every Child initiative.

26 January 2012
Secretary-General Ban Ki-moon called today on business leaders attending the World Economic Forum in Davos, Switzerland, to increase their investment in women’s education and health to ensure their well-being and encourage their participation in the world economy.

“Investing in the health of women and girls is the right thing to do and the smart thing to do for national economies and global stability,” Mr. Ban said at an event organized by the Every Woman Every Child initiative, a global effort launched in 2010 to mobilize and intensify global action to save the lives of 16 million women and children and improve the lives of millions more.

“The business community can help. Your partnership is crucial in preventing unnecessary suffering for women and girls everywhere,” Mr. Ban said, adding that despite recent progress, much remains to be done.

Mr. Ban underscored the need to boost maternal health efforts so that women everywhere can give birth safely. “Last year, more than 300,000 women died giving birth. The vast majority of those deaths could have been prevented.”

The Secretary-General also stressed the need to provide education for girls so they can lead productive lives, contribute to the economy and start families when they decide to do so. He emphasized the role that the business community can play to help them succeed.

“The private sector is uniquely positioned to deliver a better life for women and children around the world” he said. “Telecommunication companies are harnessing their networks to bring mobile health solutions to women living in the countryside. Corporations are using their technological strengths to develop affordable healthcare equipment for remote areas. Pharmaceutical companies are making essential drugs available to those most in need.”

“For the first time, the number of people falling ill with tuberculosis each year is declining. And malaria has been cut by more than half in 43 countries,” Mr. Ban said during a dinner marking the 10th anniversary of the Global Fund for AIDS, Tuberculosis and Malaria (GFTAM).

“The Global Fund has contributed to international efforts to scale up prevention. And it has helped create a world where nearly seven million people lived longer, healthier lives thanks to antiretroviral treatment for HIV,” Mr. Ban said, adding that countries need to “raise the volume” of their efforts as there are still many countries that are threatened by these diseases.

While in Davos, Mr. Ban held several meetings on the margins of the Forum with officials including the President of the Swiss Confederation Eveline Widmer-Schlumpf, the Prime Minister of Denmark Helle Thorning-Schmidt, and Brazil’s Foreign Minister Antonio de Aguilar Patriota with whom he discussed the upcoming UN Sustainable Development Conference (Rio+20) among other topics. 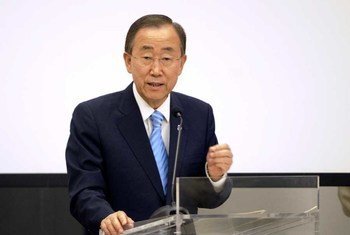 13 October 2011
Secretary-General Ban Ki-moon urged developing countries today to not lose momentum in their ongoing efforts to improve women and children’s health and warned there is still much to be done to tackle this issue.