“Although the environment remains fragile, any opportunity to pursue dialogue towards a resumption of meaningful negotiations should be welcomed and supported,” the Under-Secretary-General for Political Affairs, B. Lynn Pascoe, said in a briefing to the Security Council.

Negotiators from both sides began preparatory talks at the start of January in Amman, under the facilitation of King Abdullah II of Jordan and that country’s Foreign Minister, Nasser Judeh, with a view to a resumption of direct talks.

Mr. Pascoe reported that negotiators met again in Amman in early April and agreed to an exchange of letters outlining their positions. Both President Mahmoud Abbas of the Palestinian Authority and Israeli Prime Minister Benjamin Netanyahu have since continued to reiterate their desire to negotiate.

On 17 April, a senior Palestinian delegation met with Mr. Netanyahu in Jerusalem to deliver a letter from Mr. Abbas, and the Prime Minister indicated his intention to respond in writing.

“It is our hope that this exchange of letters can provide an opening for further dialogue,” said Mr. Pascoe.

The Under-Secretary-General also noted that the diplomatic Quartet – comprising the UN, European Union, Russia and the United States – recognized at its meeting on 11 April the urgent need for tangible signs of progress on the ground, particularly the need for continued international support for the Palestinian Authority’s institution-building efforts.

“For the United Nations, achieving peace for Israelis and Palestinians is an undiminished priority,” Mr. Pascoe said.

In a related development, UN humanitarian agencies have condemned the forced displacement during the past week of 67 Palestinian refugees, more than half of them children, as a result of demolitions and evictions.

“The forced eviction of Palestine refugees and the demolition of Palestinian homes and other civilian structures in the occupied West Bank, including East Jerusalem, [are] contrary to international law,” the Director of the West Bank office of the UN Agency for Palestine Refugees in the Near East (UNRWA), Felipe Sanchez, said.

“We urge the Israeli authorities to find an immediate solution to enable the Palestinian population of the occupied West Bank, to lead a normal life, in full realization of their rights,” he added in a joint news release issued yesterday by UNRWA and the UN Office for the Coordination of Humanitarian Affairs (OCHA).

In an incident on 18 April, the Israeli authorities demolished the homes of seven refugee families in the Palestinian community of Al Khalayleh, displacing them for the third time in six months, according to the agencies. The following day, the Israeli authorities demolished and confiscated emergency tents provided by humanitarian groups in response to the demolitions.

In another incident on the same day, two Palestinian families were forcibly evicted from their homes in the East Jerusalem suburb of Beit Hanina, and the homes were subsequently handed over to Israeli settlers, who reportedly intend to build a new settlement in the predominantly Palestinian area.

The head of OCHA in the occupied Palestinian territory, Ramesh Rajasingham, pointed out that more than 1,500 Palestinians have lost their homes as a result of demolitions and evictions since the beginning of this year. Forced evictions and demolitions cause “extensive human suffering, increase humanitarian needs and vulnerability,” he noted.

With Syria at ‘pivotal’ moment, UN officials call for full cessation of violence 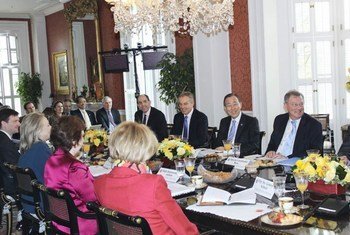 11 April 2012
The United Nations and its diplomatic partners in the search for peace in the Middle East today urged both Israel and the Palestinians to avoid actions that undermine trust between them and instead engage in positive actions that are conducive to the resumption of direct negotiations.