11 April 2012
The United Nations and its diplomatic partners in the search for peace in the Middle East today urged both Israel and the Palestinians to avoid actions that undermine trust between them and instead engage in positive actions that are conducive to the resumption of direct negotiations.

In a statement after a meeting in Washington, the so-called Quartet – the diplomatic grouping bringing together the UN with the European Union, Russia and the United States – expressed concern about unilateral and provocative actions by either party, including continued settlement activity, which, it said, cannot prejudge the outcome of negotiations.

Members of the Quartet encouraged the Palestinian Authority (PA) to continue its institution-building efforts and urged the international community to ensure that the $1.1 billion contribution to meet the PA’s recurrent financing requirements this year is available.

“The Quartet welcomed the efforts by the parties to resolve outstanding issues related to tax and customs revenue collection and urged their conclusion as soon as possible,” the group’s members said.

They were joined by Quartet Representative Tony Blair and the Foreign Minister of Jordan, Nasser Judeh, who briefed the Quartet on his country’s engagement on the issue.

The Quartet reaffirmed its commitment to examine possible mechanisms it can actively support to “advance peace efforts and strengthen the Palestinian Authority’s ability to meet the full range of civil and security needs of the Palestinian people both now and in a future state.” In relation to this, the Quartet encouraged the two parties to cooperate to facilitate the social and economic development of Area C in the West Bank, which, they said, is of critical importance for the viability of a future Palestinian state, as well as for its Palestinian inhabitants to be enabled to lead normal lives.

They took note of the PA’s progress on security in the West Bank and called on it to continue to make efforts to improve law and order, to fight violent extremism, and to end incitement.

The Quartet also expressed its concern over ongoing settler violence and incitement in the West Bank and urged Israel to take effective measures, including bringing the perpetrators of acts of violence to justice. It also condemned rocket attacks from Gaza and stressed the need for calm and security for people on both sides.

“The Quartet considers that the situation in and around Gaza remains fragile and unsustainable as long as the West Bank and Gaza are not reunited under the legitimate Palestinian Authority adhering to the PLO commitments,” the statement said. 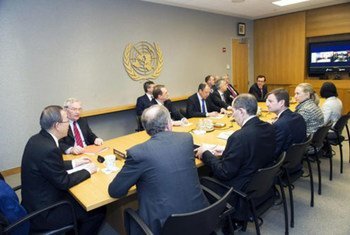 12 March 2012
The United Nations and its diplomatic partners in the search for peace in the Middle East today called on Israeli and Palestinian authorities to remain engaged in negotiations and refrain from provocative actions.