UNHCR/J. Tanner
Angelina Jolie meets schoolgirls in a village in Afghanistan. She has been named Special Envoy of UNHCR chief, António Guterres.
17 April 2012

The UN refugee agency announced today that actress and humanitarian Angelina Jolie will take on a new and expanded role as a Special Envoy of its High Commissioner, António Guterres.

"In her new role, she is expected to focus on large-scale crises resulting in the mass displacement of people, to undertake advocacy and represent UNHCR and Guterres at the diplomatic level, engaging with relevant interlocutors on global displacement issues," a spokesperson for the Office of the UN High Commissioner for Refugees (UNHCR), Adrian Edwards, told journalists in Geneva.

Ms. Jolie's interest in humanitarian affairs was piqued in 2000 while filming in Cambodia. She soon began travelling to field operations with UNHCR and was named a UNHCR Goodwill Ambassador in 2001.

Since then, according to UNHCR, she has carried out more than 40 field missions to some of the most remote regions of the world to highlight the plight of millions of uprooted people and to advocate for their protection, becoming an expert on the phenomenon of forced displacement and a tireless advocate on behalf of refugees

Mr. Edwards said Ms. Jolie’s status as Special Envoy is effective immediately, and she would focus on complex emergencies and work to facilitate lasting solutions for people displaced by conflict.

"High Commissioner Guterres is grateful to Ms. Jolie for accepting this role at a critical time in global displacement,” he added. 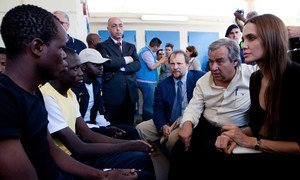 On the eve of this year's World Refugee Day, Hollywood actress Angelina Jolie joined the United Nations refugee chief on a visit on Sunday to Lampedusa, where they met some of the tens of thousands of people who have crossed the Mediterranean and descended on the small Italian island after fleeing unrest in North Africa.