The United Nations envoy for children and armed conflict today voiced grave concern over reports of recruitment of child soldiers by Tuareg rebels and Islamist militias in northern Mali, stressing that both groups have a responsibility to comply with their obligations under international law.

“Under no circumstances can the recruitment and use of children be tolerated,” said the Special Representative of the Secretary-General for Children and Armed Conflict, Radhika Coomaraswamy, in a statement. “I wish to remind all forces of their responsibility to comply with their obligations under international law.”

Reports also suggest that women and girls are being abducted and raped, and hospitals looted, Ms. Coomaraswamy said in the statement.

Amid the escalating humanitarian crisis in Mali, more than 200,000 people, including many children, have fled conflict in the country's north, and the volatile security situation and limited access to the region have prevented the UN from fully investigating the reported human rights abuses.

“We have been alerted, and will closely monitor the unfolding situation and violations committed against children by all parties,” Ms. Coomaraswamy added.

Clashes between Government forces and Tuareg rebels resumed in the country’s north in January, leading to the mass displacement of civilians. The majority of those uprooted from their villages have sought refuge in neighbouring countries, while some 93,000 are internally displaced.

In addition, rebel Malian soldiers recently took control of the country and announced the dissolution of the Government led by President Amadou Toumani Toure.

Yesterday, the former speaker of parliament, Dioncounda Traore, was sworn in as interim President, replacing Captain Amadou Sanogo, the leader of the junta that had seized power in a coup on March 22, and which later agreed to hand back the country’s leadership to a civilian administration. 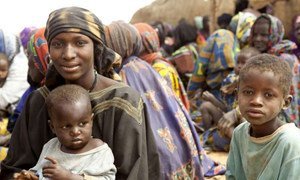 The top United Nations human rights official today called for urgent national and international action to end the political instability that has been fuelling recent violence in Mali, while voicing alarm at continuing reports of serious rights violations, especially in rebel-held northern areas.