The head of the United Nations peacebuilding office in the Central African Republic (CAR) today urged the international community to support ongoing efforts to restore stability in the country, saying that more $19 million is required to complete its disarmament, demobilization and reintegration (DDR) process.

“But at the same time it is so fragile that if we fail to help the possibility of a degradation is also there,” she said, adding that she expected that the donors would in the next few weeks provide the more than $2 million required immediately to complete the disarmament and demobilization project.

Discussions will then continue on how the raise the remainder of the funding required for the longer-term reinsertion and reintegration programmes.

CAR’s Government has contributed its fair share to the programmes, Ms. Vogt said, noting that the State has been the biggest contributor to the process.

“For example the UN gives a kit, but the Government completed this with supplementary monetary fund and the portion paid by the Government was by far the biggest,” she added. “Unfortunately they themselves have run out of money and that is why we are doing this appeal.”

In a message to the meeting of the Friends of CAR, Secretary-General Ban Ki-moon cautioned that further delay in supporting the DDR process will only accentuate tensions and undermine an already fragile process.

“The Secretary-General appeals to the Friends of the CAR to provide the necessary support, and not allow the DDR process to falter,” Mr. Ban said in the message, delivered on his behalf by the UN Under-Secretary-General for Political Affairs, B. Lynn Pascoe.

He thanked the African Union, the World Bank, the European Union, La Francophonie, neighbouring countries and bilateral partners for the support they have already provided.

“The fallout from a return to conflict would have profound consequences, not only for the Central African Republic, but for the sub-region,” the Secretary-General added.

Speaking at a press conference after the meeting, CAR’s Prime Minister, Faustin-Archange Touadera, stressed the need to provide his country the support needed to carry out the DDR activities, noting that successful peacebuilding would pave the way for the implementation of development programmes.

“It is extremely important for the population to have peace and to be able to engage in farming,” Mr. Touadera told reporters. “This is a window of opportunity that offers us the possibility of security, especially because all armed groups would like to disarm, and are willing to lay their arms and to rejoin their communities of origin.”

The UN withdrew its peacekeeping operation from CAR and Chad in 2010, at the end of its mandate, and has since concentrated on civilian peacebuilding efforts, including promoting reconciliation, supporting the disarmament, demobilization and reintegration process, and providing electoral assistance. 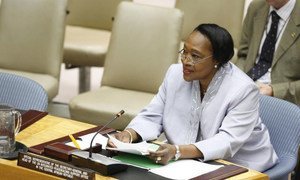 The head of the United Nations peacebuilding office in the Central African Republic (CAR) told the Security Council today that dialogue between the Government and opposition groups is paying peace dividends, but warned that lack of funds to implement programmes to disarm and demobilize former fighters could undermine efforts to restore security.