14 December 2011
The head of the United Nations peacebuilding office in the Central African Republic (CAR) told the Security Council today that dialogue between the Government and opposition groups is paying peace dividends, but warned that lack of funds to implement programmes to disarm and demobilize former fighters could undermine efforts to restore security.

“The Government is listening to and responding to advice from national stakeholders and the international community,” said Margaret Vogt, the Special Representative of the Secretary-General and head of the UN Integrated Peacebuilding Office in the Central African Republic (BINUCA).

“However, lack of funding to complete the DDR [Disarmament, Demobilization and Reintegration] process and to initiative the second phase of SSR [Security Sector Reform] could put CAR on the brink of disaster,” she told the Council in a briefing on the Secretary-General''s latest report on CAR.

Ms. Vogt called for quick action to prevent a resurgence of conflict in the country, which, she warned, could have serious repercussions throughout the region.

“Failure to consolidate the security in the CAR would increase its attractiveness as a safe have for regional brigands and rebel groups operating in the region.”

She said that more $19.3 million is required for the reinsertion and reintegration of former rebel fighters, with the budget for disarmament and demobilization operations estimated at $2.6 million.

“The success of DDR will depend on the will of the international community to support these processes,” said Ms. Vogt.

She said extensive consultations with the Government, political parties and civil society had underlined the need for discussions on reforming the electoral code and establishing a permanent polls body as a confidence-building measure on future political activities.

Ms. Vogt informed the Council of two foreign armed groups that continue to pose a threat to the peace process and overall security in CAR. They are the Front Populaire pour le Redressement (FPR) of the self-styled Chadian ''General'' Abdel Kader, alias Baba Ladde, and the Lord''s Resistance Army (LRA), which has its origins in Uganda.

“It is important that the Council sends an unequivocal message condemning FPR''s illegal activities and urge him [Baba Ladde] to stop harassing the population, lay down his arms and return to Chad. [He] should be held accountable for the violations perpetrated against [the] civilian population in the region,” she added. 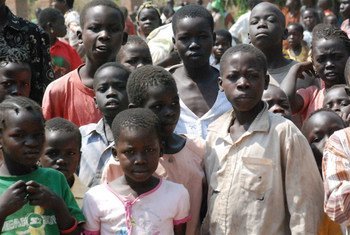 8 December 2011
Stemming the flow of illicit arms in Central Africa can help reduce the growing threat of piracy and maritime insecurity in the Gulf of Guinea, disrupt the activities of trans-national armed groups, notably the Lord’s Resistance Army (LRA), and prevent acts of terrorism and election-related tensions, Secretary-Ban Ki-moon said today.