3 April 2012
Secretary-General Ban Ki-moon today pledged the United Nations’ continued commitment to raising awareness on the challenges that people with autism face, while highlighting the many talents that are sometimes overlooked in people with the condition.

As a demonstration of that commitment, six postage stamps and two collectable envelopes designed by people with autism for the UN Postal Administration (UNPA) went on sale yesterday at UN offices in New York, Geneva and Vienna, Mr. Ban said at an awareness event at UN Headquarters attended by seven of the artists and their families.

“The eight final images reflect not only the skills and talents of eight very creative individuals, but also the autism community as a whole,” the Secretary-General said. “Your works may appear on tiny pieces of paper, but they send a big and powerful message to people around the world that talent and creativity live inside all of us.”

The event follows World Autism Awareness Day, which was observed on Tuesday. In December 2007, the United Nations General Assembly adopted a resolution declaring 2 April as World Autism Awareness Day in an effort to draw attention to a pervasive disorder that affects tens of millions around the globe. Autism is characterized by varying degrees of impairment in communication skills and social interactions and in restricted, repetitive patterns of behaviour.

For the commemorative postage stamps and collectible envelopes, more than 200 pieces of artwork were received for consideration from people with autism across the world. UNPA originally intended to pick fewer designs – however, the artwork received was so good that it decided to feature eight designs.

In his remarks, Mr. Ban called on the world to denounce the stigmatisation of people with autism and other disabilities.

“We must counter such discrimination at every turn. Our approach must be the precise opposite – mainstreaming by integrating children in regular education settings, and by creating job opportunities that make use of the strengths of people with autism,” he said.

In his message to mark the World Autism Awareness Day, the President of the General Assembly, Nassir Abdulaziz Al-Nasser, recalled that the Assembly’s resolution creating the Day in 2007 encouraged Member States to take measures to raise awareness and ensure early autism diagnosis and intervention.

“In celebrating today, each of us can help to increase and develop global understanding of the autism challenge,” said Mr. Al-Nasser. “We can also celebrate the unique talents and skills of persons with autism.”

FEATURE: UN envoy confident use of child soldiers can be eradicated 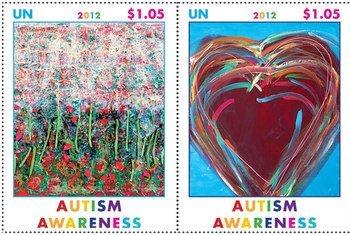 30 March 2012
The annual observance of World Autism Awareness Day should spur global action to combat the “unacceptable” discrimination, abuse and isolation that people with the disorder and their loved ones face, according to Secretary-General Ban Ki-moon.