A United Nations independent expert today urged Lebanon to investigate the death of an Ethiopian migrant domestic worker who committed suicide days after being abused in the capital city of Beirut.

The abuse committed against Alem Dechasa, 33, was caught on video and posted on social media websites, showing the victim shouting and struggling to resist a man dragging and forcing her into a car in front of bystanders. Ms. Dechasa committed suicide on 14 March.

“Like many people around the world I watched the video of the physical abuse of Alem Dechasa on a Beirut street,” said the Special Rapporteur on contemporary forms of slavery including its causes and consequences, Gulnara Shahinian. “I strongly urge the Lebanese authorities to carry out a full investigation into the circumstances leading to her death. I also express my deepest condolences to Ms. Dechasa’s family and friends.”

Ms. Shahinian, who visited Lebanon last year, said Ms. Dechasa’s case is an example of the situation that many migrant women workers face in Lebanon.

“Women who had been victims of domestic servitude told me they had been under the absolute control of their employers through economic exploitation and suffered physical, psychological and sexual abuse,” she said.

At the end of her visit to Lebanon in October, Ms. Shahinian urged the Government to enact legislation to protect some 200,000 domestic workers in the country, stressing that without legal protection some of them would end up living in domestic servitude.

“Migrant domestic workers in Lebanon, the majority of whom are women, are legally invisible. That makes them acutely vulnerable,” the Special Rapporteur said, adding that States have an obligation to ensure the truth about violations is pursued to end impunity, protect human rights and provide redress to victims and their families. 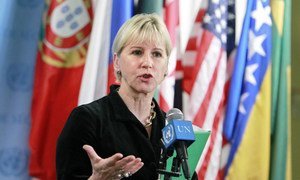 A top United Nations official today marked the International Day for the Elimination of Violence Against Women with a call for solidarity with the survivors of sexual violence in conflict throughout the world.