A top United Nations official today marked the International Day for the Elimination of Violence Against Women with a call for solidarity with the survivors of sexual violence in conflict throughout the world.

“These survivors, mainly women and girls, have lived through unspeakable horrors at the hands of armed groups who deliberately and systematically use rape as a tactic of terror,” stated the Secretary-General’s Special Representative on Sexual Violence in Conflict, Margot Wallström.

“For too long, crimes of sexual violence have been perceived as inevitable, unspeakable and a lesser crime. Together we must break down the walls of silence and shame,” she said in a statement to mark the Day, which is observed annually on 25 November.

Ms. Wallström issued the call in Abidjan, the commercial capital of Côte d’Ivoire, the current stop on a three-nation tour that also took her to Guinea and Sierra Leone.

In all three countries, the Special Representative met with survivors of sexual violence, victims associations, UN entities, and officials from governments and non-governmental organizations (NGOs).

“Both here in Côte d’Ivoire and last week in Sierra Leone, we have learned about sexual violence being used as a tool of political intimidation in the context of presidential and legislative elections,” she stated.

“In Guinea-Conakry, the perpetrators of the 28 September 2009 stadium mass rape still remain at large. This is completely unacceptable.”

She stressed that women can only reach their full potential when they feel safe. “Underlying attitudes about the rights of women will only change when people everywhere work together to change them.”

During her visit to Côte d’Ivoire, Ms. Wallström travelled to Duékoué and Bouaké accompanied by the Secretary-General’s Special Representative for the country, Bert Koenders. They met with local authorities, military contingents of the UN Operation in Côte d’Ivoire (UNOCI), UN staff, representatives of women’s and youth organizations, and victims of sexual abuse.

“These figures are not exhaustive, because some women do not declare the abuses they are subjected to, either because of shame or for lack of resources,” said the director of the centre, Mamadou Sylla.

Mr. Koenders asked the UN troops to increase their patrols and interact more with the population to have a better grasp of their concerns and protect them better, while Ms. Wallström stressed that the population was counting on the UN troops, who were their last defence against abuse.

“You have the mandate to protect civilians, women and girls in particular,” she told the blue helmets in Bouaké. “You have to find the means to do it in the most effective way.”

Along with additional patrols, Ms. Wallström also proposed regular contacts with the women to be able to better protect them.

“Women were subjected to the worst atrocities during the post-election crisis and they are afraid that that might repeat itself during the upcoming legislative polls,” she told the troops. “You are their hope. They will come towards you because they have confidence in you. Make their security a priority.”

The 11 December legislative elections will be the first to be held in the West African nation since the end of the post-electoral crisis that followed last year’s presidential election. The upcoming polls are among a number of key post-crisis tasks facing the country that also include the restoration of law and order, national reconciliation and economic recovery. 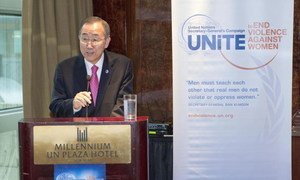 Top United Nations officials today called for engaging all of society, and especially young people, to end violence against women, a scourge that spans the globe and takes many forms, including rape, domestic violence and harassment at work.