The Joint Special Envoy of the United Nations and the League of Arab States, Kofi Annan, briefed the Council via video-link in a closed-door session earlier Monday, telling the 15-member body that he was informed of Syria’s decision in a letter he received yesterday from the country’s foreign minister.

“Mr. Annan said he wished that he had this confirmation of action sooner,” Ambassador Susan Rice of the United States, which holds the rotating presidency of the Council for this month, told reporters after the session.

Nonetheless, “he urged the Government of Syria to start immediately and to ensure that forces move no further into population centres,” she said. “And as he related, that commitment was provided by the Syrian authorities.”

Mr. Annan was appointed Joint Special Envoy earlier this year to try to resolve the crisis in Syria, where more than 8,000 civilians have been killed since March 2011, when protests similar to those in other parts of the Middle East and North Africa began.

When he was in Damascus last month, Mr. Annan put forward a six-point proposal to end the crisis that seeks to stop the violence and the killing, give access to humanitarian agencies, release detainees, and kick-start an inclusive political dialogue.

Ms. Rice noted that Syria’s commitment to complete the cessation of all forward deployment and use of heavy weapons, as well as its withdrawal from population centres, by 10 April, constitutes certain steps of that plan.

At the Friends of Syria meeting that took place in Turkey yesterday, Mr. Annan’s deputy, Nasser Al-Kidwa, had constructive exchanges with the opposition to urge them to cease their operations within 48 hours of a complete cessation of Government hostilities, Ms. Rice reported.

She said the Joint Special Envoy said he is expecting details from the Syrian Government very shortly on the other aspects of his plan, including key requests for humanitarian access, the two-hour daily humanitarian pause, as well as access for the media and the political process.

In addition, a team from the UN Department of Peacekeeping Operations (DPKO), joined by some of Mr. Annan’s staff, will travel again to Syria this week to continue preparations for a potential “monitoring and supervisory mission” of the UN.

“Mr. Annan asked the Security Council to support the April 10 deadline and, given the urgency of the situation, to begin consideration of a potential UN monitoring mission,” said Ms. Rice, adding that the head of DPKO, Hervé Ladsous, also briefed the Council on the contingency planning for such a mission.

“All members of the Security Council expressed full support for Joint Special Envoy Annan and called for his six-point plan to be implemented immediately, including a political process leading to a transition that meets the aspirations of the Syrian people for democracy, a key point reiterated more than once by the Joint Special Envoy,” Ms. Rice stated.

She added that some Council members expressed concern that the Syrian Government not use the next days to intensify the violence and expressed “some scepticism about the bona fides of the Government” in this regard.

“But in general, Council members expressed a willingness to consider Mr. Annan’s plan for a monitoring mission if indeed a cessation of violence is achieved,” she said. 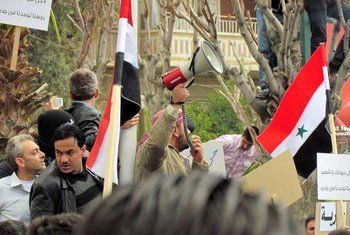 1 April 2012
Secretary-General Ban Ki-moon today urged countries at the second Friends of Syria meeting in Istanbul, Turkey, to support efforts by the United Nations and the League of Arab States to end the crisis in the Middle Eastern country, which has led to the deaths of more than 8,000 civilians since it began in March last year.