Protesters in Damascus, Syria on 8 April 2011

1 April 2012
Secretary-General Ban Ki-moon today urged countries at the second Friends of Syria meeting in Istanbul, Turkey, to support efforts by the United Nations and the League of Arab States to end the crisis in the Middle Eastern country, which has led to the deaths of more than 8,000 civilians since it began in March last year.

“I appeal to you to unite behind our efforts to facilitate a Syrian-led political transition to a democratic, plural political system, in which citizens are equal regardless of their affiliations, ethnicities or beliefs,” Mr. Ban said. “The stronger and clearer the message you can collectively send, the better the chance that we can begin to shift the worrying dynamics of this crisis in the direction of positive change.”

Mr. Ban noted that much diplomatic progress had been made since the first Friends of Syria meeting on 24 February in Tunis, with Member States rallying behind the efforts of the Joint Special Envoy of the UN and the League of Arab States, Kofi Annan.

However, Mr. Ban noted that the situation on the ground has continued to deteriorate even after Syrian authorities accepted Mr. Annan's proposal to end the crisis on Tuesday, and stressed the need for the Government to implement the plan immediately.

Mr. Annan's six-point proposal, which was submitted during his visit to Damascus last month, seeks to stop the violence and the killing, give access to humanitarian agencies, release detainees, and kick-start an inclusive political dialogue.

“Let me stress: these proposals are not a list of all the steps that the Syrian Government will need to take for this crisis to be resolved and a political solution found. They are the steps that the Syrian President needs to take today to defuse the crisis and send a clear signal that he is ready to change course,” Mr. Ban said in his remarks delivered by the Under-Secretary-General for Political Affairs B. Lynn Pascoe.

The Secretary-General underlined that Mr. Annan is also working closely with members of the opposition, who have made “encouraging moves to unite under one umbrella.”

In addition, Mr. Ban emphasized that the UN is focusing on addressing the humanitarian situation in the country by assessing the needs of the population and readying assistance. “An initial convoy carrying assistance for 2,000 displaced families was dispatched from Damascus to Tartous, and more aid is ready to be sent. Given the extent of the identified needs, the capacity of the humanitarian community in-country will need to be increased significantly in the coming weeks,” he said.

Mr. Ban reiterated that support from regional and international actors continues to be crucial to advance the prospects of a democratic, reconciled Syria. “The fate of Syria belongs to the Syrian people, and it is their welfare and universal rights that we must protect as our highest priority.”

The uprising that began in Syria last year is similar to the protests that erupted across North Africa and the Middle East, later described as the Arab Spring, which led to the toppling of long-standing regimes in Egypt, Libya and Yemen. 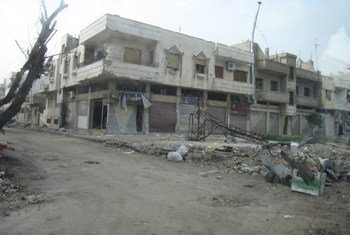 30 March 2012
The Joint Special Envoy of the United Nations and the League of Arab States, Kofi Annan, will continue consultations with heads of governments in the Arab region to seek support for his mission in Syria, his spokesperson said today.