UNDP Bangladesh/Nasif Ahmed
In Bangladesh, an innovative “disaster resilient village” was built in Shymnagar for a coastal village wiped out after Cyclone Aila.

29 March 2012
The UN envoy responsible for disaster risk reduction today commended Bangladesh for issuing a policy directive requiring that risk assessment be integrated into all development projects, as the country expands its cyclone preparedness to include earthquake readiness.

“I am heartened to hear that the same dedication which the country has devoted to protecting the population from cyclones is now being applied to earthquake risk,” said the Secretary-General’s Special Representative for Disaster Risk Reduction, Margareta Wahlström, who is on a three-day visit to Bangladesh, coinciding with its National Disaster Preparedness Day today, and ahead of the start of the country’s cyclone season on 1 April.

“We only need look to recent tragic events in Haiti, Japan and Turkey to understand the reality of this risk,” said Ms. Wahlström, who also heads the UN International Strategy for Disaster Reduction (UNISDR). “More than a third of the population, over 40 million people, live in seismic zones. UNISDR supports the full implementation of the Bangladesh National Building Code as an important first step towards minimizing casualties.

Bangladesh is considered to be particularly vulnerable to a rise in sea levels and intense cyclones; and is ranked, by the Asian Development Bank, as the Asian country most vulnerable to climate change.

While in the capital, Dhaka, Ms. Wahlström was briefed by the Minister of Food and Disaster Management, Muhammad Abdur Razzaque, who told her that his country only has 3,000 cyclone shelters, but requires 5,000. He also noted that the country’s series of embankments for protection against rising sea levels are inadequate, with many of them in need of replacement or strengthening due to their age.

Speaking at an event to mark the country’s National Disaster Preparedness Day, Ms. Wahlström said Bangladesh is the “epitome of resilience,” as evidenced by its successful efforts to reduce mortality from cyclones over the last 40 years.

“Your country is often cited as an early example of a successful national effort to prepare for the worst-case scenario through planning, effective early warning, social mobilisation and putting in place the shelters necessary to save lives,” she said. 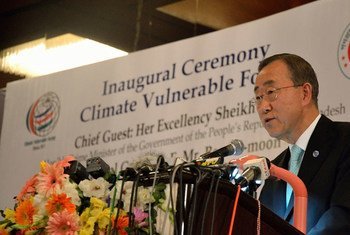 14 November 2011
Climate change is the single most important challenge the world faces, Secretary-General Ban Ki-moon stressed today in Bangladesh, a country that is all too familiar with the impact of extreme weather events and which the United Nations chief hailed as a global leader in disaster risk reduction.