29 March 2012
Secretary-General Ban Ki-moon today urged members of the League of Arab States to listen to their people and embrace democratic transitions in the region which, since last year, has witnessed a wave of popular uprisings calling for greater freedoms.

“The winds of change will not cease to blow. For decades, the people of the Arab world have seen tyrannies topple and democracies emerge in Europe, Asia and Africa,” Mr. Ban said in his remarks to the League of Arab States Summit in Baghdad, Iraq. “My message to you is simple. It draws on all that we have seen and all that we know. Listen to the people.”

Since December 2010, the series of revolutionary movements – known collectively as the Arab Spring – have led to a change of governments in Tunisia, Egypt, Libya and Yemen, and to uprisings in Bahrain and Syria, among other countries.

“The Arab peoples are calling for dignity, freedom and human rights,” Mr. Ban said, adding that the Arab Awakening has given a new sense of purpose to the League, and reiterating the commitment of the United Nations to work with it to promote peace and stability in the region.

The UN chief emphasized that for transitions to succeed, reforms must be genuine, governments must foster inclusive dialogue, women must be at the centre of the region’s future, and new opportunities and jobs must be created for young people.

“Arab countries need to give their youth a compelling view of the future as well as creating 50 million jobs within the next decade to absorb young entrants into the workforce,” Mr. Ban said.

The Secretary-General stressed that now, more than ever, the ties between the League and the UN have become closer and are bringing more tangible results, as shown by the appointment of their joint envoy in Syria, Kofi Annan, whose six-point proposal to end the crisis there was accepted by Syrian authorities on Tuesday.

Mr. Annan’s plan, which was endorsed by the Security Council last week, seeks to stop the violence and the killing, give access to humanitarian agencies, release detainees, and kick-start an inclusive political dialogue.

“It is essential that President Assad put those commitments into immediate effect. The world is waiting for commitments to be translated into action. The key here is implementation,” Mr. Ban said, adding that the opposition should also cooperate fully with the proposal to ensure the violence stops immediately.

“The arc is clear: toward more freedom, not less; toward transparent, inclusive, accountable governance,” the Secretary-General told Arab leaders. “You have the power to deliver the economic growth and national renewal that will turn the current awakening into a full blossoming for the people of the Arab world. I urge you today and in the coming months and years to put your people first.”

“Together, we must create the conditions for meaningful negotiations that will resolve the core issues of the conflict and end the occupation that started in 1967,” he told the audience at the League of Arab States gathering.

During his visit to Baghdad, Mr. Ban met with various Iraqi officials, including President Jalal Talabani, Prime Minister Nuri Kamel Al-Maliki, Foreign Minister Hoshyar Sebari, and the Speaker of Parliament, Osama Al-Nujaifi, with whom he discussed the summit as well as the situation in Iraq, Kuwait and Syria.

In addition, Mr. Ban discussed Mr. Annan’s work on Syria with the Secretary-General of the League of Arab States, Nabil Al-Araby. The two men agreed to continue to coordinate closely, and reaffirmed that President Assad must match his commitments to Mr. Annan’s plan with action. 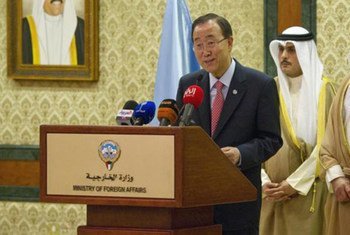 28 March 2012
Secretary-General Ban Ki-moon today called on Syrian President Bashar Al-Assad to implement a six-point plan put forward recently to find a peaceful solution to the crisis in the country.