27 March 2012
The United Nations and the Government of Haiti today voiced concern over a lack of resources to fund humanitarian services that are still required to help people in the Caribbean country recover from recent crises, including the 2010 earthquake and the cholera epidemic, and enhance preparedness ahead of the hurricane season.

According to a statement issued on behalf of the UN Humanitarian Coordinator for Haiti, Nigel Fisher, the humanitarian community seeks $231 million to fund its work in the island nation this year – so far, it has only received 8.5 per cent of that amount. In 2011, it sought $382 million, but received only 55 per cent of that amount, forcing many humanitarian organizations to scale back critical services in camps and cholera-affected areas.

As a result of the funding shortfall, Haiti was selected to receive an emergency allocation of $8 million from the UN-managed Central Emergency Response Fund (CERF), a fund established to enable more timely and reliable humanitarian assistance to underfunded crises.

The $8 million will allow partners to address urgent priority needs, but it will not be sufficient to meet the many humanitarian challenges this year. Relief agencies have requested $53.9 million for urgent humanitarian work between April and June alone.

Although the number of those living in the camps after their homes were destroyed by the massive earthquake in January 2010 has declined dramatically, almost half a million people still live such settlements, where they are exposed to cholera and the risk of flooding, especially during the May to November hurricane season, the statement said.

The requested funds would be used to assist those who will not be able to move out of camps before Haiti’s rainy season; protect camps vulnerable to flooding; provide protection for those who are exposed to sexual abuse and other forms of violence; and support the anti-cholera campaign.

Resources are also required to improve access to clean water and maintain solid waste management and hygiene promotion; increase the pace of construction of transitional shelters and the provision of rental subsidies; and strengthen preparedness ahead of the hurricane season.

The incoming Force Commander has served in the Brazilian military since 1974, including in a number of senior command and staff positions, as well as in peacekeeping operations and within the UN Department of Peacekeeping Operations at UN Headquarters. He replaces Maj-Gen Luiz Ramos, also of Brazil, who completed his assignment today.

Mr. Ban expressed his appreciation of Maj-Gen Ramos outstanding performance as MINUSTAH’s Force Commander, noting that his dedication, professionalism and leadership were critical to the UN’s stabilisation efforts in Haiti. 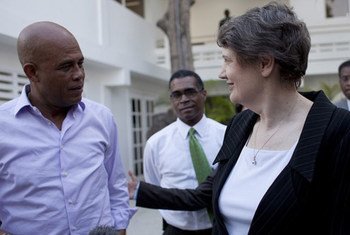