27 March 2012
The Syrian Government has accepted the six-point plan put forward by the Joint Special Envoy of the United Nations and the League of Arab States, Kofi Annan, who described the move as “an important initial step” to end the violence and urged President Bashar Al-Assad to put the proposal into effect immediately.

“Mr. Annan views this as an important initial step that could bring an end to the violence and the bloodshed, provide aid to the suffering, and create an environment conducive to a political dialogue that would fulfil the legitimate aspirations of the Syrian people,” his spokesperson said in a statement.

Mr. Annan’s six-point proposal, which was submitted during his visit to Damascus earlier this month, seeks to stop the violence and the killing, give access to humanitarian agencies, release detainees, and kick-start an inclusive political dialogue. The UN estimates that more than 8,000 people, mostly civilians, have been killed and tens of thousands displaced since the uprising – part of the broader Arab Spring movement across North Africa and the Middle East – began in March last year.

“Mr. Annan has written to President Assad urging the Syrian government to put its commitments into immediate effect,” the statement said, adding that Mr. Annan has stressed that implementation will be key, not only for the Syrian people but also for the region as the international community as a whole.

Last week, the Security Council fully endorsed Mr. Annan’s proposal and called on the Government and opposition to implement it.

“As the Syrian Government acts on its commitments, Mr. Annan will move urgently to work with all parties to secure implementation of the plan at all levels,” the statement added.

Over the weekend, Mr. Annan held meetings in Moscow with Russia’s President Dmitry Medvedev and Foreign Minister Sergei Lavrov before heading to Beijing, China, to meet with government officials.

In Tuesday’s statement, the Joint Special Envoy’s spokesperson also said Mr. Annan expressed his appreciation for the wide backing he has received for his mediation efforts, and appealed to key countries to support this development and help ensure its effective implementation.

There are currently two missions in the Syrian capital addressing the crisis: a team of experts that is discussing ways to implement Mr. Annan’s six-point proposal, and a humanitarian team that – along with the Organization of Islamic Cooperation – is assessing the humanitarian needs in the country. 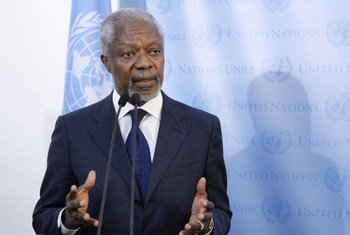 26 March 2012
The Joint Special Envoy of the United Nations and the League of Arab States for Syria, Kofi Annan, today received a formal response from the Syrian Government on his six-point proposal to end the ongoing violence in the Middle Eastern country, according to a statement issued by his spokesperson.