The UN’s human rights chief today warned that there must be no reprisals against Sri Lankan human rights defenders in the wake of a resolution calling on its Government to probe alleged abuses during the country’s civil war.

The warning from the UN High Commissioner for Human Rights, Navi Pillay, follows the adoption of a resolution yesterday by the UN Human Rights Council in Geneva, calling on Sri Lanka to take “credible” steps to ensure accountability for alleged serious violations committed in 2009 during the final stages of the conflict between the Government and the rebel Liberation Tigers of Tamil Eelam (LTTE) and to ensure accountability.

“During this Human Rights Council session, there has been an unprecedented and totally unacceptable level of threats, harassment and intimidation directed at Sri Lankan activists who had travelled to Geneva to engage in the debate, including by members of the 71-member official Sri Lankan government delegation,” said Ms. Pillay’s spokesperson, Rupert Colville, at a press briefing in Geneva.

Mr. Colville said that intimidation and harassment of Sri Lankan civil society activists have also been reported in other locations around Geneva. In addition, the Sri Lankan ambassador in Geneva received an anonymous threatening letter which is being followed up by the police and UN security.

At the same time, newspapers, news websites and TV and radio stations in Sri Lanka have been running, since January, a “continuous campaign of vilification,” including naming and, in many cases, showing images of activists, describing them as an ‘NGO gang’ and repeatedly accusing them of treason, mercenary activities and association with terrorism.

“Some of these reports have contained barely veiled incitement and threats of retaliation,” Mr. Colville said. “At least two comments posted by readers of articles of this type have called for burning down of the houses of the civil society activists named in the articles, and at least one such comment called openly for them to be killed.”

The spokesperson said the High Commissioner had noted that some of the attacks on human rights defenders were carried in Sri Lankan state media and Government websites or were filed by journalists who had been officially accredited to the Council session by the Sri Lankan authorities.

“She is calling on the Government to ensure the protection of human rights defenders, to publicly disassociate itself from such statements, and to clearly uphold the right of Sri Lankan citizens to freely engage in international debate of this kind,” Mr. Colville said.

Last year a three-member UN panel of experts on accountability issues during the civil war found there were credible reports that both Government forces and the LTTE committed war crimes during the final months of the conflict.

The 47-member Human Rights Council is responsible for strengthening the promotion and protection of human rights around the globe and for addressing human rights violations. 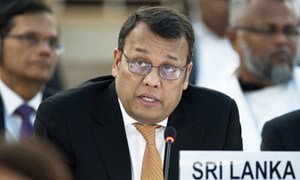 The top United Nations human rights body today called on the Government of Sri Lanka to take “credible” steps to ensure accountability for alleged serious violations committed during the final stages of the country’s civil war.