UNEP/K. Loeffelbein
Workers at a e-waste dumpsite in Ghana.
16 March 2012

The United Nations, 18 African countries, as well as non-governmental organizations, the private sector and academia today agreed on priority measures to reduce the environmental and health impacts of electrical and electronic waste on the continent.

Meeting at the headquarters of the UN Environment Programme (UNEP) in the Kenyan capital, Nairobi, the Pan-African Forum on E-Waste also stressed that the electrical and electronic sectors have the potential to create green jobs and facilitate economic development.

Organized by the Secretariat of the Basel Convention on the Control of Transboundary Movements of Hazardous Wastes and their Disposal and UNEP, with support from the Kenyan Government and private sector companies, including Dell, HP, Nokia and Philips, the Forum was the first event of its kind in Africa.

It focused on long-term solutions to the rising levels of obsolete mobile phones, refrigerators, televisions and other e-products in the continent.

Increasing domestic consumption of electronic products, as well as the ongoing import of waste electronics, such as used mobile phones, into Africa from other regions, means that the continent could generate a higher volume of e-waste than Europe by 2017, according to UNEP.

The Forum adopted a “Call to Action” initiative, which outlines eight priority areas to improve the environmentally-sound management of e-waste in Africa. They include the development of national systems to improve the collection, recycling, transport, storage and disposal of e-waste.

♦ Receive daily updates directly in your inbox - Subscribe here to a topic.
♦ Download the UN News app for your iOS or Android devices.
electronic waste 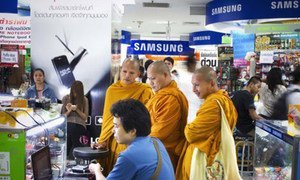 A new United Nations agreement seeks to diminish the damage caused by electronic waste through the collection and recycling of hazardous materials, as well as by introducing measures to improve the ways in which this equipment is managed.