The United Nations is backing a massive vaccination campaign under way in Yemen, where a new outbreak of measles has killed at least 126 children under the age of five.

The campaign, supported by the UN Children’s Fund (UNICEF) and the World Health Organization (WHO), will target an estimated eight million children under the age of ten following the most recent outbreak of the disease which has already caused a reported 3,600 cases.

“This situation is unacceptable,” said UNICEF Representative Geert Cappelaere in a press statement released on 10 March. “Measles is a preventable disease and Yemen was close to being declared measles free in 2010 with zero deaths,” he added.

According to reports, the disease is spreading quickly to highly populated areas as well as areas suffering from high levels of acute malnutrition – a factor which could increase the probability of death among those infected.

“Measles is a big killer of children,” warned WHO Representative Ghulam Popal. “Measles can be easily prevented by vaccination. The high rate of malnutrition and diarrhoea among children would increase the fatality of measles. Therefore, it’s very important to implement the national campaign to prevent thousands of deaths among children.”

The $9 million vaccination campaign will be implemented in phases, with the first targeting 1.5 million children in regions of the country with the highest reported incidence, including the governorates of Abyan, Al-Baidha, Aden, Dhamar, Lahj, Shabwa, and Sa’ada. The second phase, which will cover the rest of the country, will be launched at the end of the month.

In addition, the campaign will also provide polio vaccinations and vitamin A supplementation for over one million children.

This latest measles outbreak follows a drop in immunization rates prompted by the civil strife which afflicted Yemen last year as part of the larger unrest across the Arab world. Some areas of the country saw a decrease in immunization rates by up to 60 per cent, leaving children vulnerable to a range of preventable diseases, including measles as well as polio. 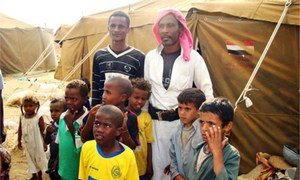 Yemen on the verge of a humanitarian disaster, UNICEF warns

Yemen remains on the verge of a humanitarian disaster, with rates of malnutrition that are among the highest in the world especially among children in communities displaced by conflict across the country, the United Nations Children’s Fund (UNICEF) reported today.