UN Photo/Jean-Marc Ferré
Paulo Pinheiro, Chairperson of the Commission of inquiry on Syria.

12 March 2012
Civilians continue to bear the brunt of violence in Syria, the head of the United Nations-appointed panel probing human rights abuses in the country said today, noting that the use of force by security forces and the military against armed groups has often led to collective punishment.

Those killed over the past year since the pro-democracy uprising began include more than 500 children, Paulo Pinheiro, chair of the Independent International Commission of Inquiry on Syria, told the UN Human Right Council in Geneva.

“This is a tragic indicator of the human rights conditions in areas of unrest,” he said. “Some children were targeted by snipers; others were victims of indiscriminate shelling. Force used by the Government against armed groups often led to collective punishment of civilians.

“Children continue to be injured, detained and tortured. In many cases they are treated as adults, in disregard of the provisions of the Convention on the Rights of the Child,” said Mr. Pinheiro, adding that communities in Syria “live in despair.”

Mr. Pinheiro told the Council that the “reliable body of evidence” from the Commission’s investigations indicated that “particular individuals may reasonably be suspected of bearing responsibility for international crimes,” saying that the findings may assist future independent and credible investigations by competent authorities.

He cautioned that increased militarization and supplying arms to opposition groups are not the right responses to the violence as it could lead to more bloodshed and make it harder for human rights and peace to prevail.

Anti-Government groups have also committed abuses, he said, although there is a great disparity between the means they use and those deployed by Government forces.

“It is imperative to break this cycle of violence to avert escalation of the armed confrontations into civil war,” said Mr. Pinheiro. “Full accountability requires fundamental reforms in the Syrian justice sector, including the repeal of laws that shield armed and security forces from justice,” he added.

A national and inclusive dialogue is essential to break the current impasse and build a democratic society that respects and ensures the rights of all Syrians, he said.

Mr. Pinheiro stressed that the international community must work with unity of purpose to meet the legitimate aspirations for human rights, dignity and justice of all communities in Syria. He urged support for the efforts of the Joint Special Envoy of the UN and the League of Arab States, Kofi Annan, to help bring an end to violence and to promote a peaceful solution to the crisis.

The Syrian Government had informed the Commission that it had gathered information on 4,800 cases of human rights violations and that 74 “elements and members of public forces” have been sanctioned, Mr. Pinheiro said. The Government had also indicated that two officers of the rank of Brigadier General and other members of the security forces have been arrested.

The violence has displaced an estimated 70,000 Syrians within the country and thousands have sought refuge in neighbouring countries, including Lebanon, Jordan and Turkey, he added.

In its report in November, the Commission – set up by the Council last – said that the Syrian military and security forces have committed crimes against humanity during their crackdown.

Mr. Annan, who visited Syria over the weekend, spoke today about the “grave and appalling” reports of atrocities and abuses in the country. “The killing of civilians must stop now. The world has to send a clear and united message in this regard,” he told reporters in Ankara, Turkey.

Meanwhile, addressing a Security Council meeting on the changes in the Middle East, Secretary-General Ban Ki-moon added his voice to the call by Mr. Annan when he met Syrian President Bashar al-Assad in Damascus over the weekend to act swiftly and respond within days to the envoy’s proposals to end the violence.

Mr. Annan urged the Syrian leader to embrace change and reforms to create the foundation for a democratic society in his country, adding that the “transformational winds blowing today cannot be long resisted.”

The situation in Syria also came up for discussion when the Secretary-General met with Russian Foreign Minister Sergey Lavrov, with both men exchanging views on the way forward with regard to the mediation efforts led by Mr. Annan. It also featured in talks between Mr. Ban and Mr. Hague, along with the situations in Somalia, Sudan and South Sudan.

“We need to be able to evacuate the wounded and deliver desperately needed supplies immediately, and without danger to humanitarian workers or the people they are trying to reach,” she told reporters at UN Headquarters.

She reiterated her concern over the plight of residents who fled the devastated district of Baba Amr in the city of Homs. “I was told that some 50,000 to 60,000 people used to live in the area. We need to know what happened to them, where they are now, and what they need,” said Ms. Amos, who is also the UN Emergency Relief Coordinator.

In a related development, the UN Children’s Fund (UNICEF) denounced the reported killing of children and women whose bodies were found in Homs yesterday. It quoted Syrian and international media reports as saying that children were among the victims discovered in the Homs neighbourhood of Karm el-Zeytoun. Some of the bodies had their throats slit. Others bore marks of torture.

“It’s hard to come to terms with savagery on this scale especially when it involves children paying the highest price for events over which they have no control,” said UNICEF Regional Director Maria Calivis. “We urgently call on all sides in this crisis to live up to their responsibility to safeguard children.” 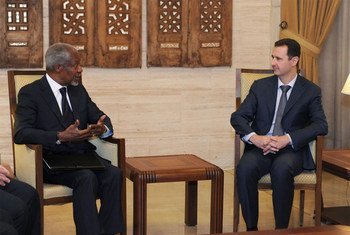 11 March 2012
The Joint Special Envoy of the United Nations and the League of Arab States for Syria, Kofi Annan, today urged Syria's President Bashar al-Assad to embrace change and reforms that will create the foundation for a democratic society in his country.