5 March 2012
Recent global events have highlighted the fact that journalists and media workers reporting on human rights issues are particularly vulnerable to threats and attacks, an independent United Nations expert said today, calling for greater protection for those who carry out such vital work.

Recent global events have highlighted the fact that journalists and media workers reporting on human rights issues are particularly vulnerable to threats and attacks, an independent United Nations expert said today, calling for greater protection for those who carry out such vital work.

“Because of the potential impact on society that journalists and media workers can have by disseminating information about human rights through a wide array of media, those individuals are often threatened, wounded and killed in an attempt to silence their voices,” stated Margaret Sekaggya, the UN Special Rapporteur on the situation of human rights defenders.

“Their work is of extreme importance in holding Governments accountable. However, those same Governments often crack down on them, including through threats, harassment, arrests, detentions, and in the worst of cases killings,” she added in a report submitted to the UN Human Rights Council, which is currently meeting in Geneva.

Restrictions on media and press freedom, and impunity around violations against journalists and media workers defending human rights can foster a climate of intimidation, stigmatization, violence and self-censorship that can have a chilling effect on their work, according to the expert.

“States should publically recognize the role of these defenders and ensure prompt and impartial investigations and the prosecution of those responsible for violations against them,” she wrote.

Presenting her report to the 47-member Council earlier today, Ms. Sekaggya said the ‘Arab Spring’ helped focus global attention on the extraordinary risks rights defenders face while promoting and protecting human rights in all regions of the world.

She also expressed deep concern that State actors, including Government officials, State security forces and the judiciary, are reportedly the perpetrators of many of the violations committed against these defenders.

“Journalists, environmental, student and youth rights defenders and those working on land issues are in significant need of protection,” she told the Council. “Most of these risks directly affect their physical integrity and that of their family members, but also involve the abusive use of legal frameworks against them and the criminalization of their work.”

“However, members of youth and student movements are in many cases seen as troublemakers rather than serious actors who can fruitfully contribute to public debate,” she said. “Their voices deserve to be heard, and they should not be threatened as a result of their engagement.”

The expert also highlighted the plight of defenders working on land and environmental issues, such as the impact of extractive industries. In her report, she noted that both State and non-State actors are involved in violations against this group of defenders, and underlines the disturbing number of killings and physical attacks reported to her.

“Human rights defenders have the right to protection, and it is the State’s responsibility to ensure this protection, so that defenders can carry out their important and legitimate work in an enabling environment,” she underscored. 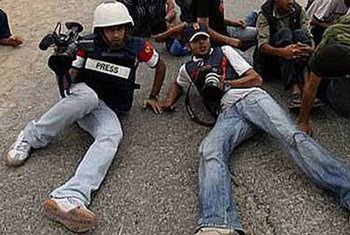 13 September 2011
Top United Nations officials today urged better protection of journalists and greater efforts to ensure that those who kill or intimidate them are brought to justice, stressing that freedom of the press is a basic foundation of peace and democracy.