IRIN/Daniel Hayduk
A crew member prepares to board a tanker that was hijacked by pirates in Benin on 24 July 2011.

27 February 2012
A comprehensive regional strategy is critical if countries are to successfully combat piracy in the Gulf of Guinea, a top United Nations official stressed today, highlighting the threat posed to the security and economic development of States in the region by the scourge.

“Gulf of Guinea countries need a united front in order to respond to effectively to the growing threat of piracy along their coasts. Isolated national initiatives are only temporarily, at best, pushing the pirates to shift their criminal operations from one country to the next,” B. Lynn Pascoe, Under Secretary-General for Political Affairs, said in a briefing to the Security Council.

He told the 15-member body that piracy and armed robbery against ships increasingly undermine efforts by States in the Gulf of Guinea region to maintain peace, security and stability and to promote socio-economic development. The threat has become even more alarming as the pirates have become more violent.

“While regional States and organizations have carried out initiatives designed to counter piracy and armed robbery against ships at the national and regional levels, the threat not only persists but appears to be gaining ground in a region where the high-value assets the pirates target are abundant,” he stated.

Last November Secretary-General Ban Ki-moon deployed a team – in response to a request from President Boni Yayi of Benin – to assess the scope of the piracy threat in the Gulf of Guinea and make recommendations for possible UN support in tackling this scourge.

The move also followed the adoption of a resolution in which the Council condemned all acts of piracy and armed robbery in the Gulf of Guinea and encouraged regional bodies to develop a comprehensive strategy to tackle it.

The mission found that piracy in the region has become more systematic, with the pirates resorting to sophisticated modes of operations and utilizing heavy weapons, Mr. Pascoe reported to the Council, adding that so far, the attacks have primarily targeted the lucrative cargo onboard the ships rather than taking hostages for ransom – the practice off Somalia.

He stated that piracy in the Gulf of Guinea hampers efforts by regional States to engage in peaceful international commerce and to exploit their vast natural resources for the socio-economic development of their countries. Recent reports have suggested for instance that Nigeria is losing an estimated seven per cent of its oil resources to criminal activities, including piracy.

“While piracy was largely an unknown phenomenon in the Gulf of Guinea 10 years ago, the number of recent attacks and the damage they cause has reached worrisome proportions.”

In 2010, 45 incidents in seven countries were reported to the UN International Maritime Organization (IMO). Last year, the numbers rose to 64 in nine countries. In only the first two months of 2012, the IMO has already recorded 10 incidents off the coasts of Benin, Congo, Côte d’Ivoire, Ghana and Nigeria. And those just the reported cases, Mr. Pascoe noted.

Towards establishing a united front to respond effectively, the assessment mission recommended that the affected countries convene a regional summit as early as possible in 2012 to develop a comprehensive anti-piracy strategy.

He also noted that while all Gulf of Guinea countries, both coastal and hinterland, are determined to counter the growing threat of piracy and armed robbery at sea, limited national and regional capacities undermine their ability to do so effectively.

“The resources at hand are inadequate and the region lacks a harmonized legal framework in the field of maritime security,” he said. “This, in turn, can undermine effective cooperation to initiate and implement joint and timely anti-piracy activities.”

While welcoming the support provided by members of the international community to Gulf of Guinea countries to strengthen their maritime security capacities, he stressed the need to do more in the face of the deepening threat. Significant logistical support is required, in particular, to bolster national and regional maritime capacities, he noted.

Representing the Economic Community of West African States (ECOWAS), Political Director Abdel-Fatau Musah said that piracy is a regional challenge requiring a regional maritime security architecture into which national and bilateral initiatives would dovetail. It is also dictated by regional challenges such as lack of financial and technical capacity and duplication of efforts owing to the lack of a coordination mechanism.

“Going forward, therefore, while encouraging the continuation of ongoing limited initiatives, ECOWAS urges all the parties concerned to scale up efforts, beginning with the proposed multilateral forum, to develop a more comprehensive framework involving all the parties concerned to ensure a holistic approach to maritime security, in close cooperation with the UN,” he stated.

Florentina Adenike Ukonga from the Gulf of Guinea Commission told the Council that there is no standard, accepted definition of piracy in the countries of the region, with the result that, depending on where they are caught, pirates can escape with little or no punishment.

“There is therefore the need to have an accepted, common definition of acts of piracy, attracting the same type of punishment in all the countries of the region and possibly the establishment of a neutral jurisdiction that will try those arrested for acts of piracy,” said Ms. Ukonga. 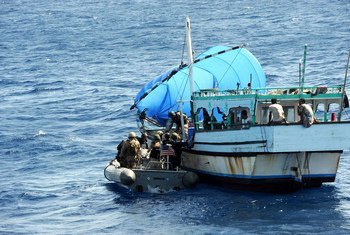 10 November 2011
Secretary-General Ban Ki-moon has deployed a team to assess the scope of the piracy threat in the Gulf of Guinea and make recommendations for possible United Nations support in tackling this scourge.