The United States actress and United Nations Goodwill Ambassador Mia Farrow today wrapped up her visit to the Democratic Republic of the Congo (DRC) with an urgent plea for better polio vaccination campaigns to eradicate the disease that continues to threaten the lives of many children in the poor African country.

“India has demonstrated that we can win the fight against polio and protect all children from the suffering of this potentially deadly and paralyzing disease,” said Ms. Farrow, who had polio as a child, and whose son, adopted from India, is paralyzed from the waist down because of the disease.

A Goodwill Ambassador for the UN since 2000, Ms. Farrow also went to Chad, where she helped launch a UNICEF-led polio vaccination campaign, during her 10-day visit to Africa.

After being polio-free for several years, the DRC reported new polio cases in 2006. Despite prevailing insecurity in certain parts of the country, vaccination campaigns have covered the entire nation. This year, two national and four sub-national campaigns are planned. The first one, which starts on 27 February, will aim to vaccinate more than 4.5 million people in six provinces.

According to UNICEF, conflict poses one of the biggest challenges to carry out vaccination campaigns, leaving many children at risk of contracting the disease. Violence, compounded with insufficient access to services, worsens their prospects.

“Children affected by armed conflict are the most vulnerable in DRC. They lack access to clean water, adequate sanitation and nutrition, education and health care,” said Barbara Bentein, UNICEF representative in the country. “Still, they have the same right to social services as children anywhere in the world.”

During her visit, Ms. Farrow also stressed the need to protect children from violence as many of them are recruited into armed groups as a consequence of the ongoing conflict. Some are abducted and others join because of poverty and a lack of other options. While some of them are reintegrated into their communities, there are many who remain in the ranks, and those who have been demobilized are at risk of re-enrolment.

“Conflict robs children of their childhood. To build a bright future for DRC we must ensure that the adults of tomorrow can develop their full potential today.” said Ms. Farrow. 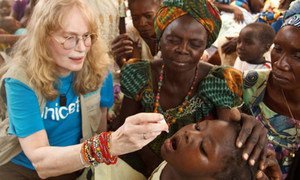 The United States actress and humanitarian advocate Mia Farrow has helped launch a United Nations-supported polio vaccination campaign in Chad, a country which holds the second highest number of registered polio cases in the world.