22 February 2012
Timor-Leste has made significant progress in strengthening national peace and stability, the United Nations envoy for the country told the Security Council today, noting that preparations for presidential elections next month and legislative polls later in the year are going smoothly.

Ameerah Haq, the Special Representative of the Secretary-General and head of the UN Integrated Mission in Timor-Leste (UNMIT), told the Council in a briefing that 13 candidates, including two women, have been approved to run in the presidential election scheduled for 17 March.

The peacekeeping mission is due to wind up at the end of this year and Ms. Haq urged the Council to extend its current mandate, which is due to end next week, until 31 December. The Secretary-General will, after consulting with the Government formed after the elections, submit a report to the Council on his suggestions on UNMIT’s anticipated withdrawal and the scope of the UN’s future presence in Timor-Leste, she said.

“2012 is a critical year for Timor-Leste, marked by several key anniversaries, including the tenth anniversary of the restoration of independence,” said Ms. Haq.

“I am counting on this year giving us the opportunity to celebrate peaceful elections, an orderly transition to a new Government, continued stability and security and further development of PNTL [national police] technical capacities,” she said.

She said electoral management institutions are striving to ensure transparent and fair polls, stressing that their capacities have increased since 2007, resulting in decreasing levels of UN support.

She said presidential candidates and political party leaders have issued constructive messages about the need for peaceful elections, saying the messages are crucial to maintain public confidence in the elections and to ensure political stability.

Timor-Leste’s President José Ramos-Horta, who also addressed the Council, said the political situation in his country has been “remarkably free of tension” in recent years.

“Ours is an open society. Transparency of our public life is a process that we set upon ourselves to promote and to deepen with the assistance of the international community,” he said.

On the UN presence in Timor-Leste after UNMIT’s departure, Mr. Ramos-Horta said that the emerging consensus is that the Organization’s role could include support to further strengthen democratic institutions, capacity-building on security, particularly the national police, as well as continued assistance in areas such as governance, justice and human rights. 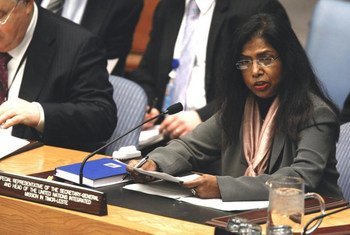 22 November 2011
Timor-Leste is making significant progress in consolidating its social, security and political stability despite a number of challenges, a senior United Nations said today, noting that presidential and legislative elections slated for next year will be key milestones in that process.