Criminal gangs are becoming a threat to the world’s glaciers, which are already receding as a result of climate change, the United Nations said today, citing a case in Chile where police are investigating the theft of some 5,000 kilograms of millennia-old ice from the Jorge Montt glacier.

Mining for ice could pose a major additional threat to the 454 square-kilometre glacier, which is situated in Chile’s Bernardo O’Higgins National Park, and is part of the 13,000-square kilometre Southern Patagonian Ice Field, the third largest frozen land mass in the world after Antarctica and Greenland, according to the UN International Strategy for Disaster Risk Reduction (UNISDR).

The Jorge Montt glacier is melting at a rate of one kilometre per year, making it one of the world’s most iconic symbols of global warming, UNISDR noted.

“The authorities in Chile are to be congratulated on clamping down on this illegal activity,” said Margareta Wahlström, the Secretary-General’s Special Representative for Disaster Risk Reduction and head of UNISDR.

“The Jorge Montt glacier and other major ice-fields are a precious part of our common world heritage and important yardsticks by which we can measure how man-made global warming is threatening the world’s water supply and damaging the environment. They deserve all the protection we can give them, including safeguarding from this type of vandalism.”

The prosecutor handling the case in Chile reported this week that those implicated in the ice theft had been identified as a result of an investigation that followed the arrest of the driver of a refrigerated truck last Friday. The truck was intercepted in the southern Chilean town of Cochrane.

Chile’s Centre for Scientific Studies has said that several of the country’s glaciers are shrinking because of global warming, but the much-studied Jorge Montt is one of those shrinking the fastest. 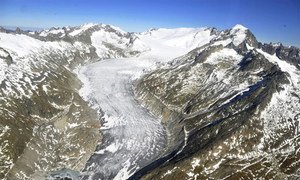 Secretary-General Ban Ki-moon today took a helicopter flight over the Swiss city of Bern to observe the decreasing volume of the country's glaciers and later exchanged views with President Micheline Calmy-Rey on sustainable development and the forthcoming United Nations conference on climate change in South Africa.