OCHA
Valerie Amos speaks with a mother and children while on a three-day mission to the Horn of Africa to raise awareness for the most severe humanitarian crisis in the world.
25 January 2012

The United Nations humanitarian office announced today the allocation of $104 million to support 13 neglected emergencies around the world.

“Millions of people need help around the world in places which have fallen out of the headlines. These funds will help to save lives. I hope that more funds will become available from governments and others to support a continued humanitarian response,” said Under-Secretary-General for Humanitarian Affairs and Emergency Relief Coordinator Valerie Amos.

The funds, which will be provided by the Central Emergency Response Fund (CERF), will be prioritized by humanitarian coordinators in each of the recipient countries to impact critical life-saving programmes. Specific projects will also be developed and proposed by humanitarian country teams in the next month.

Recipient countries were selected on the basis of severity of humanitarian need and analysis of funding levels.

In Pakistan, where funding for relief operations has considerably diminished, $15 million will be allocated for people in conflict-affected areas in the country, and in Haiti, $8 million will be provided for thousands of people that continue to live in camps two years since the devastating earthquake.

Other recipient countries include the Central African Republic (CAR), Chad, Côte d’Ivoire, the Democratic People’s Republic of Korea (DPRK), Nepal, the Philippines, the Republic of Congo, and Syria.

According to a news released issued by the Office for the Coordination of Humanitarian Affairs (OCHA), a second round of allocations will follow in July. Last year, 20 underfunded emergencies received more than $143 million.

This year, donors have so far pledged more than $377 million in support of the Fund, which is financed by voluntary contributions from Member States, non-governmental organizations (NGOs), local governments, the private sector and individual donors. The Fund commits a third of all contributions each year to redress imbalances in global aid distribution by supporting neglected crises.

♦ Receive daily updates directly in your inbox - Subscribe here to a topic.
♦ Download the UN News app for your iOS or Android devices.
humanitarian assistance 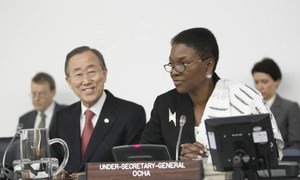