The top United Nations envoy in South Sudan stressed today that the best way to protect civilians in the strife-torn state of Jonglei is through military deterrence and urged the Government to deploy more troops and police in the area to patrol buffer zones between rival communities and defuse tensions.

Hilde Johnson, the Secretary-General’s Special Representative and head of the UN Mission in South Sudan (UNMISS), told reporters in New York via a video-link that the UN had stepped up operations in Jonglei and is now flying daily reconnaissance missions and deploying troops into areas where civilians are most at risk of attacks.

She voiced deep concern over hate speech emanating from individuals and groups inside and outside Jonglei, and warned those responsible that inciting ethnic violence is a violation of international law and a crime under South Sudan’s domestic laws.

“The United Nations condemns this in the strongest terms,” said Ms. Johnson. “I have called the leadership at all levels in Jonglei state and nationally to demand a halt to this invective. The same message of condemnation came from the President of South Sudan, Salva Kiir Mayardit, in his address to the national legislative assembly today,” she said.

She also urged the Government to bring the full force of the law to bear on those responsible for instigating ethnic animosity through hate speech.

Deadly clashes between the Lou Nuer and Murle communities in recent weeks have displaced tens of thousands of civilians and prompted UN agencies to launch a major humanitarian operation to assist those in need.

UNMISS took decisive measures last month when a column of an estimated 8,000 armed Lou Nuer youth was detected advancing on the town of Pibor, which is inhabited by the Murle ethnic group.

“We moved our forces to where civilians were under greatest threat and committed about half of our combat-ready personnel to heavily populated areas like Pibor County. Eight of our 15 companies were mobilized for this operation,” said Ms. Johnson.

“Our deterrent measures and early warning alerts enabled a large number of civilians in Jonglei state to move out of harm’s way ahead of time, thereby saving thousands of lives,” she said, adding that the number of casualties would have been much higher had UNMISS not acted.

Meanwhile, the UN World Food Programme (WFP) said that humanitarian interventions in areas such as South Sudan would greatly benefit from improved telecommunications given the level of the need for relief services and the remoteness of some of the areas where aid is required.

“There is currently no public telecommunications infrastructure in South Sudan,” said Arthur Sawmadal, the WFP Head of Information Technology in South Sudan.

“We rely on the mobile network and this is limited to the capital cities and a few locations in the field. Satellite services by commercial providers have overstretched capacity so what connectivity we do have is not only expensive, but unreliable.”

As the global leader of the Emergency Telecommunications Cluster, WFP is collaborating with the Directorate for Development Cooperation of the Luxembourg Ministry of Foreign Affairs and telecommunications company Ericsson to develop a cutting-edge solution to assist the entire humanitarian community operating in disaster situations.

‘emergency.lu’ is a comprehensive solution to address the challenge of rapid response capacity by filling the communications gap that often occurs at the onset of large-scale disasters, especially in remote locations. The solution consists of satellite infrastructure and capacity; communication and coordination services; satellite ground terminals for long-term and rapid deployment; and transportation of equipment to the disaster area. 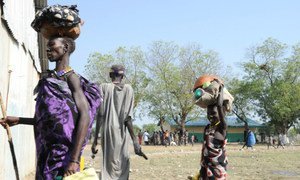 More than 120,000 people affected by the recent violence in South Sudan’s Jonglei state may need emergency assistance – double the number of those originally thought to need help – the United Nations humanitarian official in the country said today.