23 January 2012
The International Criminal Court (ICC) today ruled that four prominent Kenyans, including the deputy prime minister, are to stand trial for crimes against humanity and other offences allegedly committed following general elections in late 2007.

With respect to Mr. Ruto and Mr. Sang, who are charged with crimes against humanity, deportation or forcible transfer and persecution, the pre-trial judges found that “on the basis of the evidence presented, that they are responsible for the charges levied against them,” according to a summary of the pre-trial chamber’s decision.

“These crimes resulted in the death of hundreds, and the displacement of thousands of civilians from Turbo town, the greater Eldoret area, Kapsabet town and Nandi Hills. The Chamber also found that these crimes were committed as part of an attack directed against particular groups, namely, Kikuyu, Kamba and Kisii, due to their perceived political affiliation to the Party of National Unity.”

As regards Mr. Kenyatta and Mr. Muthaura, the court found that the prosecution had established substantial grounds to believe that the crimes of murder, deportation or forcible transfer, rape, other inhumane acts and persecution were committed in an attack on the civilian residents of Nakuru and Naivasha towns between 24 and 28 January 2008.

“With respect to the criminal responsibility of Mr. Muthaura and Mr. Kenyatta, the chamber was satisfied that the evidence also established substantial grounds to believe that they are criminally responsible for the alleged crimes, as indirect co-perpetrators.”

“As a result of the decisions issued today, Mr. Ruto, Mr. Sang, Mr. Muthaura and Mr. Kenyatta are committed to trial. They will be tried before a different chamber for the charges confirmed. To this end, one or more trial chambers will be established by the Presidency of the ICC,” the pre-trial chamber stated in its ruling.

The pre-trial chamber declined to confirm charges against two other suspects – Henry Kiprono Kosgey, former Minister of Industrialization, and Mohamed Hussein Ali, the Police Commissioner at the time of the violence, saying that the prosecution had not produced sufficient evidence to link them to the charges against them.

“It is our utmost desire that the decisions issued by this chamber today bring peace to the people of the Republic of Kenya and prevent any sort of hostility,” pre-trial judges Ekaterina Trendafilova, the presiding judge, and her colleagues, Hans-Peter Kaul and Cuno Tarfusser, said in their decisions.

“The decisions are the result of intensive and committed judicial work of the chamber, conducted impartially, independently and conscientiously in the interests and in the service of justice,” they added.

More than 1,100 people were killed, 3,500 injured and up to 600,000 forcibly displaced in the violence that followed the December 2007 elections. There were also hundreds of rapes, possibly more, and at least 100,000 properties were destroyed, according to ICC Chief Prosecutor Luis Moreno-Ocampo. 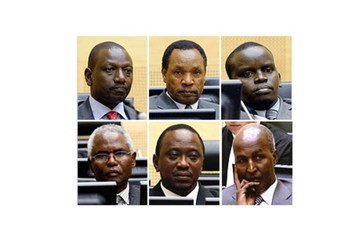 30 August 2011
The International Criminal Court (ICC) today dismissed an appeal by the Kenyan Government to throw out the cases against six high-ranking national officials, including a deputy prime minister, two ministers and a police chief, for possible crimes against humanity in post-electoral violence more than three years ago.