UNHCR/S. Schulman
A woman forced to flee her home village rests outside a shelter in North Kivu province.
20 January 2012

The United Nations refugee agency today voiced concern over fresh violence in eastern parts of the Democratic Republic of the Congo (DRC) that has forced more than 100,000 civilians to flee their homes in the provinces of North Kivu and South Kivu since November.

In North Kivu, an estimated 35,000 people have been displaced as a result of raids on villages and clashes between rival militia groups in Walikale and Masisi territories, according to Adrian Edwards, spokesperson for the UN High Commissioner for Refugees (UNHCR).

At least 22 people have reportedly been killed and an unknown number of women raped, Mr. Edwards told reporters in Geneva.

In the district of Shabunda in South Kivu, some 70,000 people have been displaced. According to local sources, 4,400 civilians are thought to have fled attacks over the past two weeks alone. Many of those fleeing are reported to be moving towards the neighbouring provinces of Maniema and Katanga.

“UNHCR is very concerned about the consequences of this violence,” said Stefano Severe, the agency’s regional representative. “For now the people in the east are displaced within the country, but there is a risk that people might cross borders if the situation gets worse.”

Peacekeepers with the UN Organization Stabilization Mission in DRC (MONUSCO), staff from UNHCR and their colleagues from the UN Office for the Coordination of Humanitarian Affairs (OCHA) met some of the internally displaced persons (IDPs) during an assessment mission to affected areas last week.

They found several deserted and burned-down villages, as well as looted health centres. In Walowa Yungu, for example, 14 of the 18 villages were deserted.

Most of the IDPs are either living with host families in crowded makeshift settlements or occupying schools. Some of them told the assessment team that they have lost access to their farmlands and that they are victims of forced labour, harassment and violence.

“We are working with our partners to address the needs of the displaced as we gain access to them. This includes providing shelter, clean water, food and health care,” said Mr. Edwards. “In addition to the material assistance, our colleagues on the ground are also providing psycho-social support to survivors of rape and other traumas caused by the violence.”

Before the latest outbreak of violence, there were more than 1.1 million people uprooted by years of armed conflict in North Kivu and South Kivu.

In a separate development further south, UNHCR has received reports of more than 12,000 displaced people in the central areas of Katanga province. An inter-agency mission was expected to travel to the areas this week, but the trip was postponed for security reasons.

According to initial information obtained by UNHCR, 65 per cent of those displaced in Katanga are young boys and girls who have sought refuge in 17 villages in Mitwaba territory. They reportedly fled from fresh militia activity in the relatively stable province. 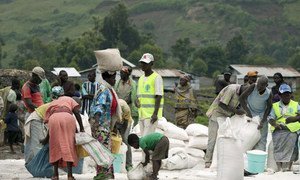 The United Nations peacekeeping mission in the Democratic Republic of the Congo (DRC) today strongly condemned attacks against civilians by members of an armed group in remote villages in South Kivu province last week, during which at least 45 people were killed.