More than 103,000 refugees and asylum-seekers from the Horn of Africa made the perilous journey across the Gulf of Aden to reach Yemen during 2011, the United Nations refugee agency said today, while warning of increasing violence directed towards migrants.

“Last year saw an almost 100 per cent increase from 2010 when 53,000 people made the same journey,” said Adrian Edwards, spokesperson for the UN High Commissioner for Refugees (UNHCR). “The previous highest number of arrivals we have seen was in 2009 when 78,000 people made the journey.”

The increase of migrants is all the more astounding considering the journey across the Gulf is full of dangers, noted UNCHR, which has been gathering data on the migration flows in the region for more than five years.

Among those who made the crossing last year, more than 130 are known to have drowned, and those who reach Yemen’s shores arrive in desperate conditions, suffering from dehydration and malnourishment.

“Those crossing the Red Sea and the Gulf of Aden face extreme risks and challenges at every stage of their journey – in their countries of origin, during transit, and on and after arrival in Yemen. These include physical and sexual violence as well as trafficking,” said Mr. Edwards.

“Once in Yemen they face new difficulties including inadequate access to basic services such as shelter, water, food, emergency health care, limitations to the freedom of movement and lack of access to a means of livelihood.”

The increase in migrants has come particularly from Ethiopia, which now accounts for three out of four arrivals. Until 2008, the majority of those crossing the Gulf had come from Somalia, as refugees fled violence and human rights abuses in their country. However, since 2009, Ethiopians make up the majority.

“Many Ethiopian arrivals still say they left home because of a lack of economic and livelihood opportunities,” said Mr. Edwards. “As economic migrants, they see Yemen as a transit country.

Fearing detention and deportation, Ethiopian migrants avoid contact with the authorities as they look for ways to reach other Gulf States. They routinely experience robbery, abuse, and extortion at the hands of smugglers and traffickers.”

UNHCR stressed that it particularly alarmed by an incident last Friday in the city of Taiz, in which three Ethiopians were shot by smugglers operating along Yemen’s Red Sea coast. The bodies were left on the outskirts of Al-Dhubai village.

“These deaths are tragic and underline the serious risks African refugees, potential asylum-seekers and migrants face in crossing the Gulf of Aden or the Red Sea. It is our hope that the Yemeni authorities will find the perpetrators and bring them to justice,” Mr. Edwards said.

UNHCR also warned about the increasing prevalence of violent physical and sexual abuse of refugees and migrants at the hands of smugglers while at sea or on land. The agency reported it is currently managing a network of reception centres along the coast and is providing medical assistance and counselling to survivors. 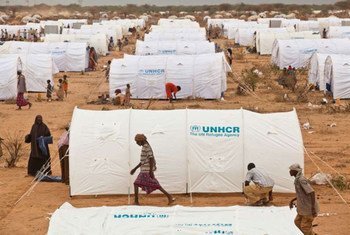 13 January 2012
The United Nations refugee agency said today it is increasingly concerned about insecurity in and around camps hosting hundreds of thousands of Somali refugees in the Horn of Africa.