As demands for justice grow, UN must usher in new era of respect for the law – Ban

The United Nations must respond as the demands for justice around the world grow, Secretary-General Ban Ki-moon said today, calling for ushering in a new era of respect for the rule of law.

“We have to create a world where the rule of law, social justice, accountability and a culture of prevention will be the foundations of sustainable development and durable peace,” Mr. Ban stated in his remarks to the Security Council meeting on the rule of law and transitional justice in conflict and post-conflict settings.

“It will take commitment from the international community and the Security Council to see that justice is done where justice is due,” he added.

Mr. Ban noted that today’s debate, organized by the South African presidency of the Council, comes at a time of “breathtaking” political change driven by peoples’ calls for accountability, transparency and the rule of law.

“Women and men everywhere want their rights to be respected. They are risking their lives in peaceful protests to demand the opportunities, dignity and secure future that every individual deserves,” he stated.

“There is no silencing this cry for justice. Repression only raises the volume.”

“Our task,” he added, “is to usher in an era of respect for the law in every field: from peace and security to trade and development from the high seas to local communities.”

Never has the UN’s rule of law sector faced such great challenges, or such historic opportunities, noted the Secretary-General, adding that today’s meeting is part of a broader international push to “rise to this moment.”

In September, the UN will convene a high-level meeting on the rule of law – the first event of its kind and the first time, since 2005, that these issues will be discussed by top leaders.

The Organization’s work to promote the rule of law extends to more than 150 countries and includes efforts to combat transnational crime, build confidence and capacity in State institutions and battle discrimination against women.

“For societies traumatized by years of fighting and gross violations of human rights, nothing is more critical than establishing the rule of law,” said Mr. Ban. “When the guns fall silent, the United Nations is often the first organization on the ground helping fractured countries to start building peace and strengthening key institutions.”

The UN’s approach has three basic components: promoting accountability and reinforcing norms through transitional justice; building justice and security institutions to promote trust; and focusing on justice for women and girls to foster gender equality.

“The Security Council has helped bring these priorities to the top of the international agenda,” the Secretary-General said. “But this Council can do more.”

He encouraged the 15-member body to include the promotion of transitional justice measures more broadly in the mandates of peacekeeping and political missions, as well as to reject any endorsement of amnesty for genocide, war crimes, crimes against humanity or gross violations of human rights and international humanitarian law.

“I urge you to bring justice closer to the victims,” he added. “That means giving them the opportunity to speak out to truth commissions and to participate in judicial proceedings. It also calls for supporting remedies and reparations. And it requires strengthening national prosecutions for serious international crimes.”

In a presidential statement read out during the meeting, the Council acknowledged that political will and the concerted efforts of both national governments and the international community are critical to preventing conflict and achieving success in the restoration of and respect for the rule of law.

“The Council notes the need for increased efforts to ensure that conflict-affected countries are able to access a broad range of relevant expertise, in particular from developing countries, in order to effectively build the capacity of justice and security institutions,” it added. 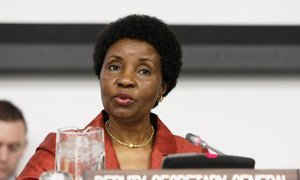 The Deputy Secretary-General today stressed the importance of United Nations engagement in advancing the rule of law, a vital endeavour as highlighted by the popular movements for greater accountability and transparency seen in several countries this year.