UN Photo/Paulo Filgueiras
Wide view of the Security Council open debate on strengthening the rule of law in the maintenance of international peace and security.

19 February 2014
Stressing that the rule of law is at the heart of the work of the United Nations, Secretary-General Ban Ki-moon told the Security Council today that it is vital to ensure that the Organization makes the most of its assistance in this area to help post-conflict countries build the foundations for long-term peace and stability.

“When public institutions fail to deliver justice or protect the people’s rights, insecurity and conflict prevail,” Mr. Ban said in his remarks to an open debate on strengthening the rule of law in the maintenance of international peace and security. Nearly 70 delegations are expected to take part in the debate, which will culminate in a Presidential Statement from Council members.

He noted that, at the national level, reconciliation and enduring peace require strong rule of law through responsive and inclusive institutions. “People must be able to trust that their institutions can resolve disputes promptly and fairly, and provide equitable access to basic services, including justice and security.

“At the international level,” he continued, “adherence to the rule of law is critical for conflict prevention and the peaceful resolution of disputes. Mechanisms to combat impunity and ensure accountability – including UN-assisted criminal tribunals – reinforce the primacy of law.”

That is why strengthening the rule of law is now an integral part of the mandates of peacekeeping operations and special political missions, said Mr. Ban, noting that 18 UN missions worldwide currently mandate rule of law support.

The UN provides support to national authorities on various aspects of the rule of law, ranging from advice and assistance in constitution-making processes to reforming justice and security institutions and dealing with legacies of atrocities.

“The crafting of peacekeeping and peacebuilding mandates provides a strategic opportunity to support national priorities in this area,” said Mr. Ban. “Along with the police and military elements, mandates for new missions should include justice and corrections. This will help extend the State authority and lay the foundation for longer-term institution building.”

The Secretary-General highlighted four important points that should guide rule of law mandates. First, mandates should reflect the specific challenges of a country and identify priority areas of support.

Also, sequencing or establishing phases for the implementation of the different components of assistance is vital, since promptly addressing people’s immediate security and protection needs is crucial to laying the groundwork for the long-term success of institutions and processes.

Given limited human and financial resources, a gradual or progressive implementation strategy may be the most effective in transitioning from peacekeeping to long-term development assistance, he continued.

And lastly, assessing progress is essential to making policy decisions supported by evidence and responsive to particular needs.

“The Security Council has made important inroads to promote monitoring and evaluation of UN rule of law assistance,” Mr. Ban said. “Specific and sequenced mandates, which include data collection and evaluation capacities, would further support these efforts.” 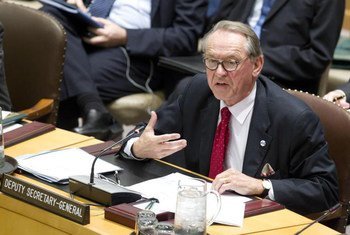 30 January 2013
The Deputy Secretary-General today highlighted the need for measures that enhance the rule of law in conflict and post-conflict situations, stressing that more coordination at national and local levels is needed among United Nations entities to effectively support countries on this issue.