The head of the United Nation entity tasked with promoting gender equality today voiced concern over reports of attacks against female protesters in Egypt who turned up to exercise their freedom of assembly and expression.

“Women along with men and children have been victims of the excessive use of force against peaceful protesters over this past weekend and this week,” said Michelle Bachelet, the Executive Director of the UN Entity for Gender Equality and the Empowerment of Women (UN Women), in a statement.

She said that the thousands of women who assembled on the streets of Cairo and in the city’s Tahrir Square on Tuesday night only wanted to assert their right to democratic participation in charting their country’s future.

“We call upon the political and military authorities in Egypt to guarantee women’s political and civil rights, and to offer the Government support in ensuring these rights are respected and that those who violate them are held accountable,” she said.

Ms. Bachelet noted that UN Women has consistently stressed the crucial role that Egyptian women have played in the country’s democratic revolution.

“Women from civil society have been one of the primary engines driving the social movement for political opening, public participation in decision-making, and an approach to citizenship that embraces inclusiveness and respect for individual human rights,” she said.

The upcoming constitutional review process provides a unique opportunity to engage the widest cross-section of Egyptian society in “re-visioning” the future of the country, Ms. Bachelet said.

“We call upon the Egyptian authorities to ensure their [women’s] full protection from violence from any side, and their full freedom to play their essential role in building the new political institutions of Egypt,” she added. 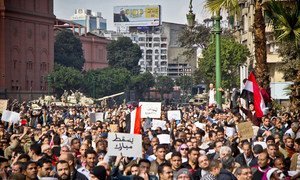