21 December 2011
Two key organizers of the Rwandan genocide in 1994 were today sentenced to life in prison by the United Nations tribunal dealing with war crimes in the country which resulted in the deaths of some 800,000 people in just 100 days.

Édouard Karemera and Matthieu Ngirumpatse, both senior members of the ruling party in Rwanda during the genocide, were found guilty of genocide, direct and public incitement to commit genocide, extermination as a crime against humanity, rape and sexual assault as crimes against humanity, and killings as causing violence to health and physical or mental well-being.

Mr. Ngirumpatse was the chairman of Rwanda’s then-ruling National Revolutionary Movement for Development (known by its French acronym, MRND) party while Mr. Karemera was his deputy at the time.

The International Criminal Tribunal of Rwanda (ICTR) delivered its judgment after finding that both men were members of a “joint criminal enterprise” to destroy the Tutsi population of Rwanda, and consequently liable not only for their own criminal acts and omissions, but also for those committed by others within the common purpose of the enterprise.

In addition, the tribunal, which is based in Arusha, Tanzania, ruled that they bear extended liability for the widespread rapes and sexual assaults of Tutsi women and girls, which were a foreseeable consequence of their joint criminal enterprise.

In a news release issued by the ICTR, the tribunal described the crimes, committed between April and July 1994, as being “of the utmost gravity” and found the accused responsible for the crimes carried out by the Interahamwe militia unit members in the cities of Kigali and Gisenyi. These include the crimes committed by Colonel Théoneste Bagosora, who has also been sentenced to life imprisonment.

The tribunal also ruled that Mr. Karemera, who was also interior minister in the interim government in 1994, bears superior responsibility for the criminal activities of the civilians who participated in the civil defence programme, and local officials who were part of the territorial administration during the genocide.

The trial chamber dismissed the count of complicity in genocide because it was pleaded as an alternative to the count of genocide. Although it found the accused guilty of conspiracy to commit genocide, the chamber did not convict them of this count, noting that the conviction for genocide fully accounted for their criminal responsibility.

Created in December 1994, the ICTR tries those alleged responsible for crimes against humanity and other offences committed during the genocide.

To facilitate the tribunal’s ongoing work, the Security Council adopted a resolution today extending the terms of office of four permanent judges and eight “ad litem” judges of the tribunal until 30 June 2012 or until the completion of the trial to which they are assigned, stressing the importance of the ICTR being “adequately staffed to complete its work expeditiously.” 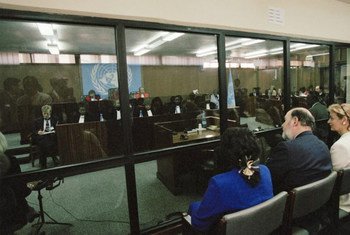 19 December 2011
The United Nations tribunal trying suspects connected to the 1994 genocide in Rwanda has dismissed an appeal by a former pastor accused of inciting attacks against Tutsi civilians, reaffirming its decision to refer him for trial in the national court system.