A woman salvages belongings from her ruined village in Mindanao, Philippines, after Tropical Storm Washi struck on 16 December 2011

19 December 2011
United Nations officials today sent their sympathies to the people of the Philippines after a tropical storm slammed the south of the country at the weekend, causing devastating floods that left more than 500 people dead and hundreds of others missing.

Secretary-General Ban Ki-moon voiced his condolences to the affected families, the people and the Government of the Philippines, saying that the UN and partners stand ready to support the national authorities in responding to the disaster.

Margareta Wahlström, the Secretary-General’s Special Representative on Disaster Risk Reduction, said in her message of sympathy that there are lessons to be learned from tropical storm Washi, also known locally as Sendong.

She noted that the storm was identified two days before flash floods and landslides swept through the cities of Cagayan de Oro and Iligan on the island of Mindanao.

“The second is to understand the deadly cocktail of exposure and vulnerability created by poverty, rapid urbanization and deforestation which results in huge loss of life, homes and hard-won development gains when a storm of this magnitude strikes. The proportion of the world’s population exposed to typhoons and cyclones has almost tripled in the last 30 years and disaster management is not keeping pace,” she added.

“We have to take note that the high number of casualties caused by Typhoon Sendong could be due to lack of awareness of the risk and proper action of residents in affected areas, as they have not experienced floods of such magnitude in the past,” said Ms. Legarda.

“Thus, information dissemination and community disaster preparedness is also a crucial part in this effort, because an educated populace would be prepared and know what to do in times of disaster.”

In wake of leader’s death, Ban says UN will continue to help people of DPR Korea 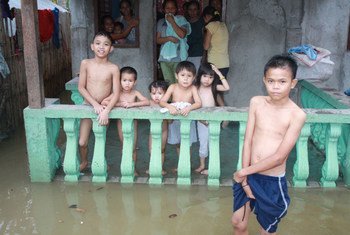 12 December 2011
A senior United Nations relief official today called for a surge in financial support to provide humanitarian aid to hundreds of thousands of people driven from their homes by conflict on the Philippine island of Mindanao.