19 December 2011
The United Nations peacekeeping chief today reaffirmed the world body’s unwavering commitment to stand by Afghanistan, adding that it is examining how it can best assist the country as it proceeds with the transfer of security responsibilities and takes greater ownership of its development.

“The United Nations is committed to supporting the Afghan Government and its people for the long term,” Hervé Ladsous, Under-Secretary-General for Peacekeeping Operations, told the Security Council as it met to discuss the situation in Afghanistan.

“We have been in Afghanistan for more than half a century assisting the Afghan people and we will be there far beyond 2014 as long as the Afghans need us,” he added.

The Department of Peacekeeping Operations (DPKO) is currently leading a comprehensive review of the mandated activities of the UN Assistance Mission in Afghanistan (UNAMA) and the UN’s support in country, as requested by the Council.

“International assistance must support the Afghans in their efforts to strengthen their institutions and to advance economic development, rule of law and respect for human rights,” noted Mr. Ladsous, who recently visited the country and held talks with a range of actors on the UN’s future role.

“These processes take time in the best of conditions. They will also take time to materialize in Afghanistan.”

At the International Conference on Afghanistan, held in the German city of Bonn earlier this month, Secretary-General Ban Ki-moon outlined three main priorities for the UN as it moves forward. These are to help link security and development; to promote and assist an Afghan-led, inclusive reconciliation process based on dialogue and consensus; and to continue to advocate for and promote human rights, in particular the rights of women and children.

The UN received a clear message of support in Bonn for its crucial role in Afghanistan from the Afghan Government and the international community, Mr. Ladsous said. “It is time to look again at that role and refocus our mandate, adjusting it to the evolving situation on the ground.”

An inter-agency team that visited the country recently will compile its findings and recommendations to inform the Council’s discussions related to the renewal of UNAMA’s mandate in March 2012.

Mr. Ladsous also reported that the transfer of security responsibilities to Afghan forces is proceeding apace. “But there is no room for complacency,” he stated, stressing that for the transition to be sustainable, security has to be linked to development.

“The Afghan people must see tangible improvements to their daily lives, especially in terms of economic opportunities. It is more urgent than ever, therefore, that the civilian side of transition proceed equally strongly and briskly.”

Mr. Ladsous added that there is still “a long way to go” in protecting civilians, securing the rights of women, and tackling humanitarian concerns that continue to afflict the country.

Jawed Ludin, Deputy Foreign Minister of Afghanistan, told the Council that, as the country moves forward, the role of the UN will remain “crucial.”

He reported that, with the implementation of the second tranche of the transition announced by President Hamid Karzai last month, Afghan forces are taking charge of security for over 50 per cent of the country.

“Transition, however, is not just about security,” he added. “As we move to take full responsibility for defending our country and securing the lives of our people, we are also assuming greater ownership of affairs on the civilian front, including the political process and the development agenda.”

The Council, in a statement read by Ambassador Vitaly Churkin of Russia, which holds the Council’s presidency for this month, said it welcomes the conclusions of the International Conference on Afghanistan and the declaration in Bonn which states that the process of transition, which will end in 2014, should be followed by a decade of transformation in which “Afghanistan consolidates its sovereignty through strengthening a fully functioning, sustainable state in the service of its people.”

The Council stressed that the process of transition should entail the assumption of the leadership responsibility by the Afghan Government and that this should be followed with strong partnerships and commitments between the Government and the international community.

The Council also heard from the former Special Representative of the Secretary-General and head of UNAMA, Staffan de Mistura, and was introduced to his successor, Jan Kubiš, who will take up his duties next month.

In wake of leader’s death, Ban says UN will continue to help people of DPR Korea 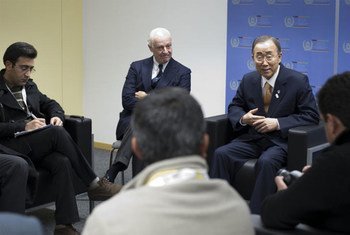 5 December 2011
The challenges ahead as Afghanistan seeks to consolidate peace and development are large but the international community will not be deterred in its support for the country’s efforts, Secretary-General Ban Ki-moon pledged today at an international conference in Bonn.