Stemming the flow of illicit arms in Central Africa can help reduce the growing threat of piracy and maritime insecurity in the Gulf of Guinea, disrupt the activities of trans-national armed groups, notably the Lord’s Resistance Army (LRA), and prevent acts of terrorism and election-related tensions, Secretary-Ban Ki-moon said today.

“I am firmly engaged in the fight against these threats, and encourage this Committee to continue to reflect on effective solutions for their eradication,” Mr. Ban said in a message to the 33rd meeting of the United Nations Standing Advisory Committee on Security Questions in Central Africa, held in Bangui, the capital of the Central African Republic (CAR).

“These achievements were realized thanks to the political will of your countries to address the peace and security challenges facing your sub-region,” Mr. Ban said in the message, delivered on his behalf by Abou Moussa, his Special Representative for Central Africa.

“I encourage you make for effort to consolidate these achievements. As you prepare to commemorate the 20th anniversary of the committee, the ratification and early entry into force of the Kinshasa Convention will be an important testament of the credibility of all your initiatives against the illicit circulation of light weapons in Central Africa,” said Mr. Ban.

The Central Africa Convention for the Control of Small Arms and Light Weapons, their Ammunition, Parts and Components that can be used for their Manufacture, Repair or Assembly, also known as the Kinshasa Convention, is intended to regulate small arms and light weapons and combat their illicit trade and trafficking in the region. 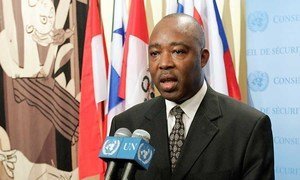 The Security Council today encouraged the United Nations Regional Office for Central Africa (UNOCA) to form partnerships with other organizations to help countries in the region to address peace and security challenges, particularly the flow of illicit small arms, border security and the threat posed by the marauding Lord’s Resistance Army (LRA).