The United Nations and its partners today called for $7.7 billion to provide humanitarian assistance to 51 million people in 16 countries over the course of next year, launching the largest appeal in two decades.

The United Nations and its partners today called for $7.7 billion to provide humanitarian assistance to 51 million people in 16 countries over the course of next year, launching the largest appeal in two decades.

“Millions of people will be affected by emergencies caused or worsened by the impact of climate change, insecurity over food and water, economic and political crises, migration, urbanization and rapid population growth,” Under-Secretary-General for Humanitarian Affairs Valerie Amos said at the launch of the appeal in Geneva.

“We urgently need the continued support of people and governments around the world to help those desperately in need,” underscored Ms. Amos, who is also the UN Emergency Relief Coordinator.

The appeal for 2012 is the largest launched since the creation of the Consolidated Appeal Process (CAP) in 1991, according to the UN Office for the Coordination of Humanitarian Affairs (OCHA).

“Millions need our help,” Secretary-General Ban Ki-moon told a year-end press conference in New York, referring to today’s appeal. “Economic times are hard. But we cannot balance budgets with the lives of the world’s poorest and most vulnerable.”

Ms. Amos told reporters that the appeals with significant increases from 2011 are Somalia, Yemen, Djibouti, South Sudan, and the Mindanao situation in the Philippines. Somalia requires $500 million more for next year than for 2011.

The humanitarian crisis in the Horn of Africa – Kenya, Ethiopia, Djibouti and Somalia – remains the largest in the world, she noted. Four million people need urgent humanitarian aid in Somalia alone, and close to 600,000 refugees have sought protection in Kenya.

Humanitarian action has already had a significant impact in many regions of Somalia, and three areas of the country have moved from being “famine” areas to “emergency.”

“However, the situation remains fragile, and aid organizations will only be able to sustain these improvements if the current level of assistance is maintained,” stress Ms. Amos.

The $2.4 billion requested in 2011 for these four countries in the region has been 78 per cent funded. Total requirements for the Horn of Africa will be 20 per cent higher in 2012 than for 2011.

The appeal is also seeking $763 million to help people in the world’s newest nation, South Sudan; $718 million for DRC; $455 million for Chad; $437 million for Afghanistan; $416 million for the occupied Palestinian territory; and $230 million for Haiti, among other countries.

The launch of the Consolidated Appeal marks the culmination of a process in which 466 aid organizations, including UN agencies, non-governmental organizations and other international bodies, have come together to coordinate plans to meet ongoing needs in a strategic way.

Last year the UN and its partners sought more than $7.4 billion to help 50 million people suffering from the effects of conflicts and natural disasters in 28 countries.

Meanwhile, in New York, the General Assembly held its annual discussion on strengthening the coordination of UN humanitarian and disaster relief assistance, including issues such as boosting resilience, preparedness and capacities for humanitarian response, as well as humanitarian financing.

♦ Receive daily updates directly in your inbox - Subscribe here to a topic.
♦ Download the UN News app for your iOS or Android devices.
humanitarian|appeal 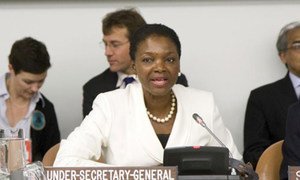 Relief agencies require another $4.3 billion to assist millions of needy people around the world during the second half of this year, the United Nations humanitarian chief said today, adding that donors have so far made available 45 per cent of the funds requested at the start of 2011.