Secretary-General Ban Ki-moon urged members of the Alliance of Civilizations today to combat extremism and promote tolerance at a time when universal values are being tested in many parts of the world, particularly in countries undergoing political transitions.

“Again and again, we are reminded that our differences are nothing compared to our shared humanity,” Mr. Ban said in his remarks to the opening session of the fourth United Nations Alliance of Civilizations Forum in Doha, Qatar.

More than 2,000 participants, including political and corporate leaders, civil society activists and faith communities have gathered there to take part in the UN Alliance of Civilizations Forum (UNAOC) to discuss how to improve relations across cultures, combat prejudice and build lasting peace.

“Speaking out against extremism, advancing tolerance, standing for justice, dignity and mutual understanding. These values are at the core of the Alliance of Civilizations,” Mr. Ban said, noting that these principles were more important than ever during times of change.

“Everywhere, these values are being tested. We see in the daily news headlines: in Syria, North Africa, across the Middle East, and beyond.”

Mr. Ban stressed the Alliance's responsibility to prevent conflict and violence by promoting dialogue and laying the groundwork for mutual understanding.

“The Alliance has a special role in speaking out when terrorists attack and kill innocent people, when politicians stir hatred and exploit stereotypes to win votes, when moderate voices struggle to be heard amid the politics of polarization,” he said.

The Secretary-General underscored the need to help nations in transition in the Middle East and North Africa who have been part of the so-called Arab Spring movement.

“In some countries these transitions have been peaceful. Others have seen bloody crackdowns. But in all, reconciliation is essential for transformations to succeed,” he said. “There is considerable scope for the Alliance to help these nations to shape their future.”

Mr. Ban told members of the Alliance that empowering women and youth, along with achieving sustainable development, should also be key areas of focus to ensure a positive future.

“I want the coming years to see an emphasis on the problems of women and children, in particular – in health, in education, in creating jobs and new opportunities on a scale never seen before,” he said.

He also warned against potential new divides that impact development, and called on the Alliance to do its utmost to engage with students, families, activists and their religious communities.

“Have a dialogue – far and wide. But also ensure that it leads to action – real and concrete to make this world better for all people.”

President of the General Assembly Nassir Abdulaziz Al-Nasser also spoke at the forum, praising the Alliance for emphasizing “the good governance of cultural diversity as an important strategy for peace” since its inception.

He stressed that as the deadline for the Millennium Development Goals (MDGs) approaches, the work of the Alliance will become even more relevant as the world starts to build “a post-MDGs agenda,” and added the Doha forum should be a turning point for the Alliance.

“By emphasizing the crucial connection between cultural diversity, peace and development, the forum will advance the Alliance’s visibility and highlight its relevance to the global agenda.”

Mr. Al-Nasser also said he was encouraged to see a strong focus on the contribution of youth to the forum. “I am a firm believer in the need for youth participation in efforts to advance cross-cultural understanding and sustainable development,” he said.

He also shared his plans to organize an interactive debate of the General Assembly on the topic of the Alliance in March to foster intercultural dialogue and spotlight successful initiatives by young people exploring innovative means to collaborate among cultures.

During his visit to Doha, Mr. Ban also inaugurated an anti-corruption centre to promote transparency.

“When desperately needed funds fail to reach their destinations, it is the poor and vulnerable people who are denied education, healthcare and other essential services to maintain a dignified [life],” Mr. Ban said at the centre's opening ceremony.

“At a time when many millions of people are suffering grievously from the economic crisis and rising prices for food and fuel, the fight against corruption takes on even more urgency than it had already,” he added.

“Fighting corruption is a job for all of us, from CEOs in boardrooms to police on the streets, from civil servants in their ministries to prosecutors and judges in their courtrooms,” Mr. Ban stressed. “We all have a responsibility to speak up in the face of corruption. Integrity starts with individuals.” 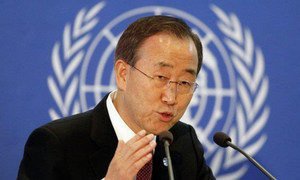 Secretary-General Ban Ki-moon called today on young people to help combat the multiple threats faced by the planet such as climate change and environmental destruction, to ensure a sustainable future for generations to come.