Secretary-General Ban Ki-moon urged countries today to fulfil their aid commitments and invest in the world’s poor, adding that success will only be attained if donors unite their efforts and ensure their financial support is accountable, flexible and country-driven.

Speaking at the Fourth High-Level Forum on Aid Effectiveness in Busan in the Republic of Korea (ROK), Mr. Ban said governments must not let the global economic crisis keep them from supporting those most in need.

“Do not let this economic crisis, do not let short-term austerity deflect you from your long-term commitment to the world’s poorest people,” he said. “Cutting aid will not balance your budgets. But it will hurt the poor – the most vulnerable of the human family.”

Mr. Ban said aid should be seen as a smart investment in security and prosperity as it will help create jobs and expand markets. He stressed that this is particularly relevant for countries that are in transition from conflict.

However, he also said countries receiving aid must be equally responsible for the resources they are given, and ensure that they set clear development priorities and strategies so there can be a visible impact in their societies.

Enhancing transparency, cracking down on corruption, creating incentives for private investment and entrepreneurship, and engaging with civil societies should all be part of their aid effectiveness strategy, Mr. Ban said.

Mr. Ban also addressed business leaders, underscoring the importance of their skills, ideas and dynamism to make a difference in poor countries through their partnerships with governments, international organizations and non-governmental organizations (NGOs).

In addition, Mr. Ban told the forum that for aid to be effective it needs to be accountable and flexible, while allowing aid recipients to have a say in where it is most needed and how it should be used.

“Aid too often comes with strings attached. Such conditionality can add to the obstacles countries already face, especially in times of crisis,” Mr. Ban said. “We need to work in partnership so that donors and client countries are agreed on the most appropriate use of assistance.”

Mr. Ban also said he had asked the UN system to develop and Integrated Implementation Framework to facilitate the monitoring of global commitments to the Millennium Development Goals (MDGs) and their delivery. The goals which include eradicating extreme poverty and hunger, the achievement of universal primary education, promoting gender equality, combating HIV/AIDS, tuberculosis and malaria and improving women and children’s health, have an achievement deadline of 2015.

Mr. Ban also spoke at the Private Sector Forum, where he further emphasized the role that businesses can play to support growth in the least developed countries, especially during times of financial austerity, by creating jobs and being drivers of innovation.

“Governments have to set the stage, with the right regulatory frameworks and incentives, but the private sector and civil society can help deliver. The private sector can truly be the backbone of growth,” he said, giving examples of private initiatives that are contributing to economic development in poor countries.

“Soft-drink manufacturers are helping to distribute clean water. Pharmaceutical companies are reducing the cost of medicines and vaccines. Cellular-phone companies are helping put women in remote areas in touch with doctors and nurses to get the care they need.”

Assistant Secretary-General for Disaster Risk Reduction Margareta Wahlström also spoke at the forum, where she stressed the importance of managing risk to safeguard investments in Africa and Asia, where countries can lose as much as a fifth of their gross domestic product (GDP) to disasters each year.

“The costs of disasters are borne by developing countries with no help from the international community. With annual losses of up to 20 per cent of their GDP, countries often expend their entire development budget to address disaster impacts,” said Ms. Wahlström.

“Disaster risk reduction is not just ‘another thing to do.’ It is something you must do to make the other things work,” she added.

♦ Receive daily updates directly in your inbox - Subscribe here to a topic.
♦ Download the UN News app for your iOS or Android devices.
aid effectiveness 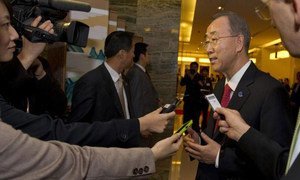 As aid effectiveness forum begins, Ban urges States to live up to commitments

Fiscal austerity during the current straitened economic times is no excuse for countries not delivering on their aid commitments, Secretary-General Ban Ki-moon said today, calling for a united front from the international community to help the poor.